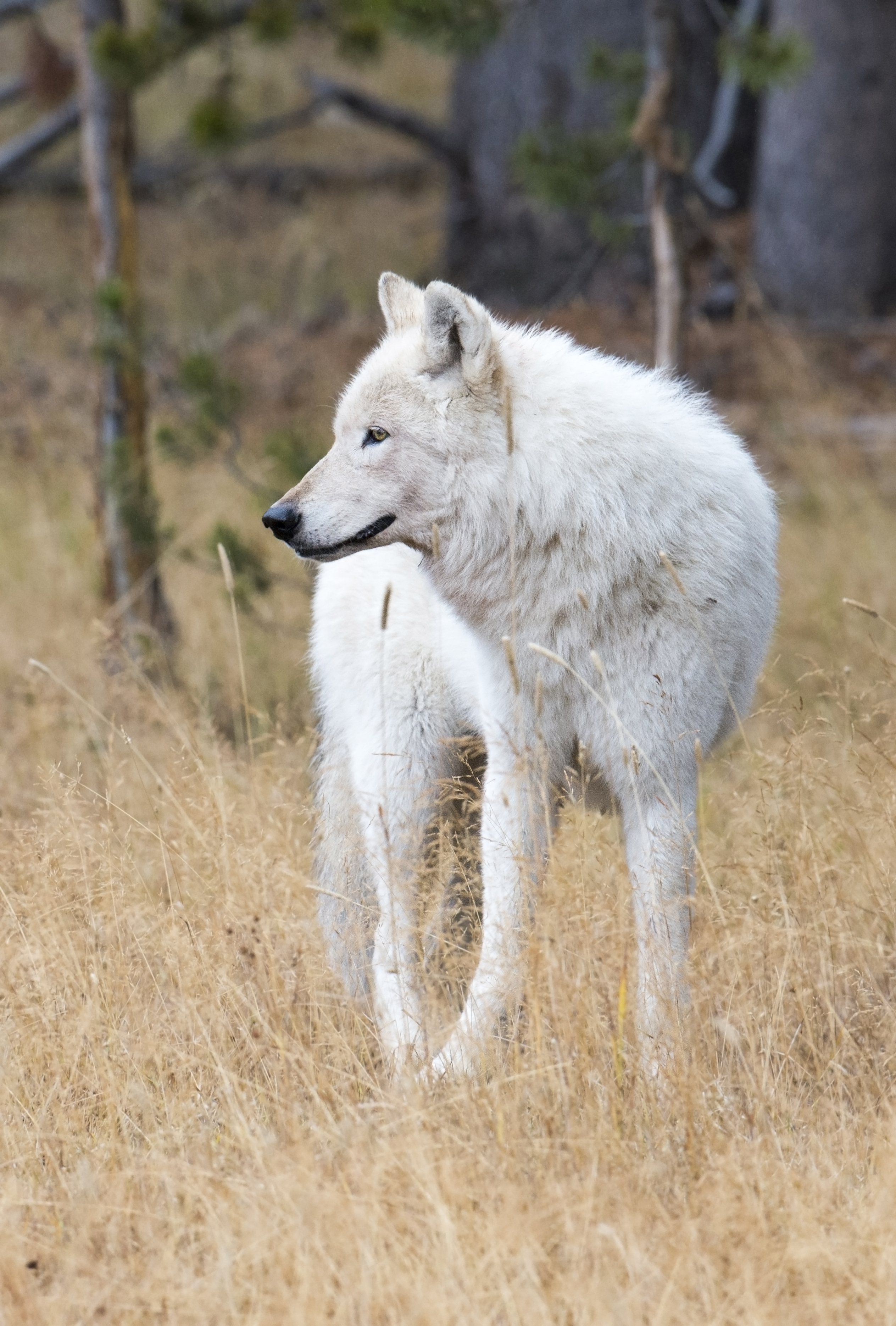 The end of an Era

The White Lady of Yellowstone, alpha female of the Canyon pack with her leading man, 712M (originally of the Mollies pack) was a legend in our first national park and she delighted many  visitors in Hayden Valley over the years. 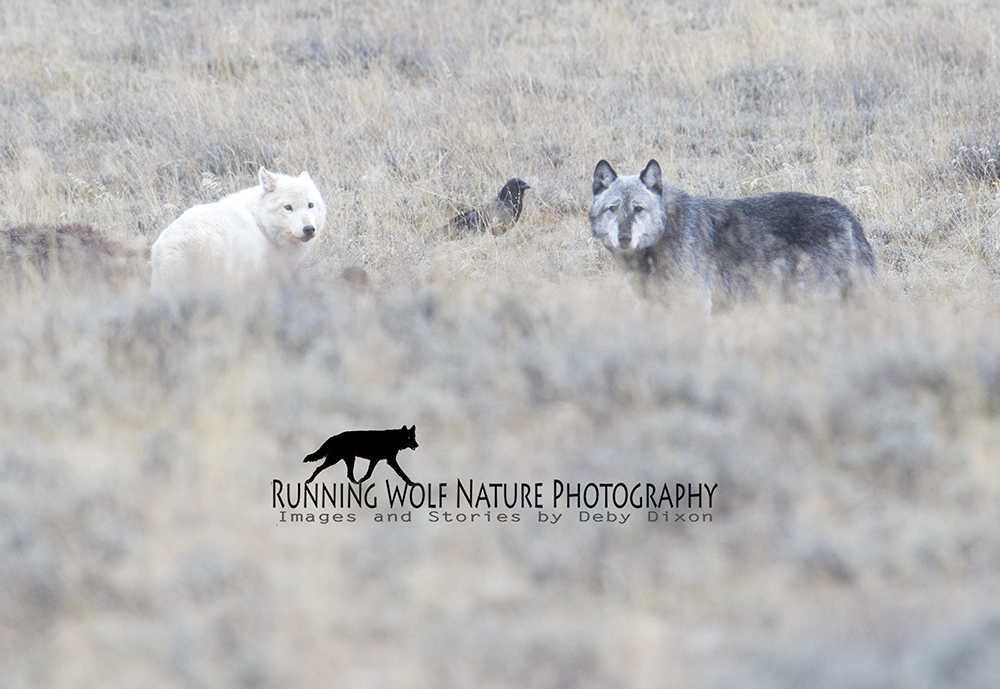 Today, thousands of park visitors, and those who view the park via social media, are mourning the passing of our White Lady.  The white wolf was found by hikers yesterday, in the park, near Gardiner, MT, with life threatening injuries.  The park service made the decision to end her suffering and will be conducting a necropsy to determine the cause of her death.

There has been no other wolf quite like the White Lady in her beautiful white coat.  Often, I would look across Hayden Valley, to the west, and see a bright white spot on a faraway hill, near the place where she was born 12 years ago.  She looked like a big shaggy rug and just knowing she was there made me smile.  That summer, in 2014, when I saw her out there quite often, our white wolf had broken her right front leg and that is where she chose to heal, with her family at her side.

The first time I saw the White Lady, 712 and their beautiful black daughter, was in October 2012.  I did not know that the Canyon pack, or a white wolf, even existed in Yellowstone.  In fact, I had never clearly seen a wolf in the park – just tough glimpses through thick trees the year before.

I had gone to Hayden Valley very early  and was talking to some other photographers near Mud Volcano when we saw some elk come down the hill towards the Yellowstone River.  We watched from afar for a minute and then decided to go capture the elk crossing the river.  As I drove back to Nez Perce picnic area and the river, three elk ran down the hill, followed by three wolves.  I could not believe my eyes.  My hands were shaking and I could barely catch my breath when grabbing my camera and firing off some shots.  A wolf advocate was born in that moment and still, today, I feel the same excitement and trembling when one of them comes close enough to photograph.

The three wolves came down to the rivers edge and watched the elk as they stood in the river.  I grabbed my tripod and walked down to the river, just praying that they would hang out long enough for me to get some shots.  The wolves looked at us, sniffed and greeted each other and laid down right there.  For my first experience, it was unbelievable.  I will cherish those photos forever.

My next encounter with the Canyons was a day of celebration on the Northern Range.  I believe it was April of 2013 and the Canyons had come to the Blacktail.  At that time they were a large pack and I remember that one striking beauty had severe mange and he looked like a poodle with his bare rear end and puff ball tail.

The Canyons were on a little knoll, all spread out.  They did a lot of howling and some traveling back and forth to a carcass.  The air was jumping with the electricity of excited, happy humans and anyone who was able to get out to see the wolves, did.  I can not drive by that hill today without remembering that time in 2013, particularly since I found them there last April while filming the sandhill cranes.  The cranes were jumping, dancing and talking when all of a sudden the howling of wolves came across the sagebrush.  The sandhills stopped and listened and I kept filming them for a minute or two before looking for the wolves.  The first one that I recognized was 712 and you have never seen my camera turn so fast.  The White Lady, their 3 year old daughter and two yearlings were with them.  Five Canyons was a good number to see.

But, back to that day in 2013.  I remember people talking about how the alphas were old and that it could be the last we ever saw of them.  They said that each day with the Canyons was a gift and, for four more years, that is exactly what I thought of each sighting.

In the summer of 2014 we all watched as 755 (former alpha male of the Lamar Canyon pack, mate to 06) came calling on the Canyon’s two year old daughter.  Mama Canyon seemed perfectly fine with her daughter running away to be with the handsome black wolf but 712 was distraught and howled and howled for her to return to them.  755 and the Canyon daughter became the Wapiti Lake pack and had two litters together before he was run off by much younger males from the Mollies pack.

The extraordinary thing about the union of 755 and the Canyon daughter (now turned white like her mom) is that the Canyon alphas yielded their territory in Hayden Valley to the new couple and moved to the west side of the park.  After that, Canyon sightings became rare and we all looked forward to their winter visits to Mammoth.  But, 712’s collar quit working and so seeing the pack was always a matter of luck and being in the right place at the right time.

I had that experience this past January.  It was a moment I had yearned for – a chance to photograph the 11 year old alpha female in the snow.  She came down to the road and hung out for a little while and once again I was trembling with excitement.  At the time I knew it could be my last opportunity but she looked so healthy that it didn’t seem possible that she would be dead today.  It was my last time.  I was very, very lucky.

Change was already happening in the Canyon pack at the time of the White Lady’s death.  712 was seen mating was a grey female from the Cougar Creek pack but he and the white wolf were still together afterwards.  Over the past few weeks, people in the interior of the park have reported seeing the White Lady with her grey male pup and two yearlings, one black male and one grey female, but not with 712.  There is a rumor that one of the collared Mollies boys were with them during one of these times.  So, perhaps 712 had been run off from his pack.  Or, maybe something happened to him.  We will most likely never know, unless he is still alive and shows up again.  The White Lady and 712 had nine years together – longer than any other alpha pair in the park.  The oldest wolf was the Cougar Creek alpha female – she died at the age of 13.  Our white wolf wasn’t far behind.

This wolf had a long and incredible life and during that time she did more than her share for Yellowstone and its visitors.  People came to Hayden Valley every year just to see the Canyons and the wolves often obliged with close views.  The White Lady wasn’t shy of people, wary some, but not shy.  The wolf project never collared this wolf due to her incredible beauty – she was a special gift for all of us.  We can now hope that one of her daughters will continue the legacy of the Canyon pack.  It is obvious that her male pup from last year will be white – it would be a true gift to see more white fur on the Yellowstone landscape.

And, now her time is up and our tears are flowing.  Many of us because we will never see her again and many others because they had hopes of seeing this wolf one day.

RIP White Lady, you did your job on this earth well – loved your mate, raised your pups, cleaned up the eco-system and helped to make it healthy again, and entertained us for hours.  You made people care about wolves and because of that many of your species will live long and productive lives.  Fare thee well – knowing I will never see you again is tough, but knowing you are free from pain and the cruelties of life in the wild is comforting.

The memories and joy that this wolf and her family gave to myself and all of Yellowstone were priceless and we owe her our respect.  Please refrain from speculation about what happened, whether she had dementia or was kicked out of her pack.  The facts are that the White Lady was seen and photographed with her pack several times over the past few weeks and that 712 was not with them.  When a wolf is kicked out of a pack, they are kicked out and there is no returning for dinner.  As far as dementia – it is obvious that her bad leg hindered her a great deal and forced her to stay on the road for easier travel.  It appeared to me that she lagged behind her pack because of this and became separated, at which time she would begin howling to find them.  They always did get back together at some point.  If  it turns out that a human was involved in her death, let’s remember her well and not do or say anything that will possibly anger someone into harming more wolves.  Threats of violence and name calling won’t help any wolves and will be a disservice to the grace with which this wolf went through her life.

I am out of town right now and so am just going to post several images that I have with me, so that you can look at her some more and know that this was one amazing wolf deserving of respect and integrity. 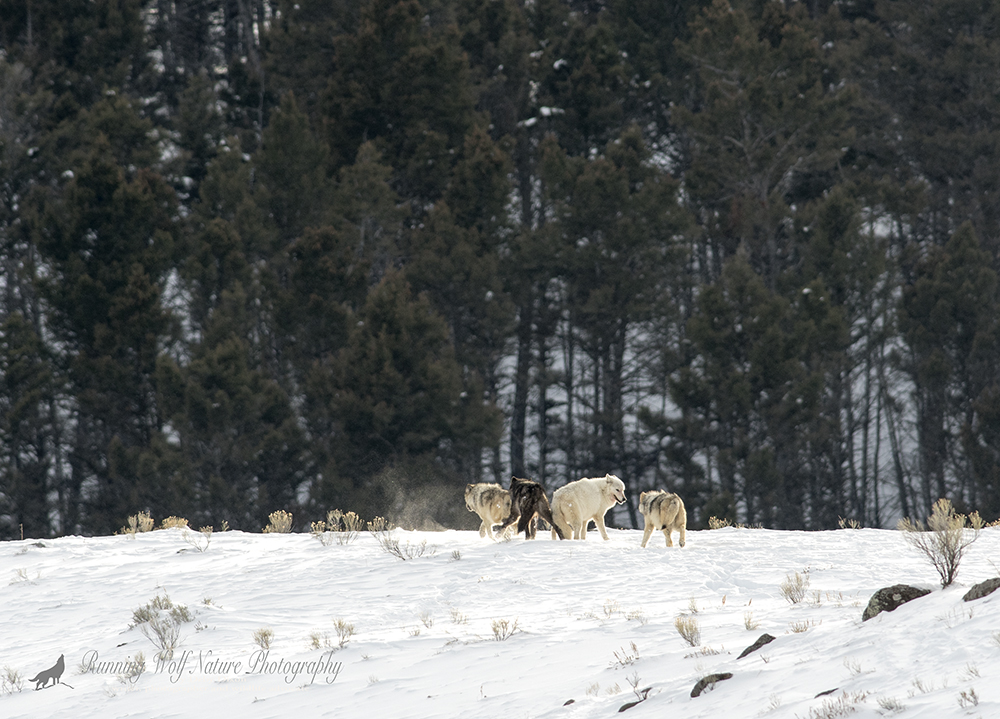 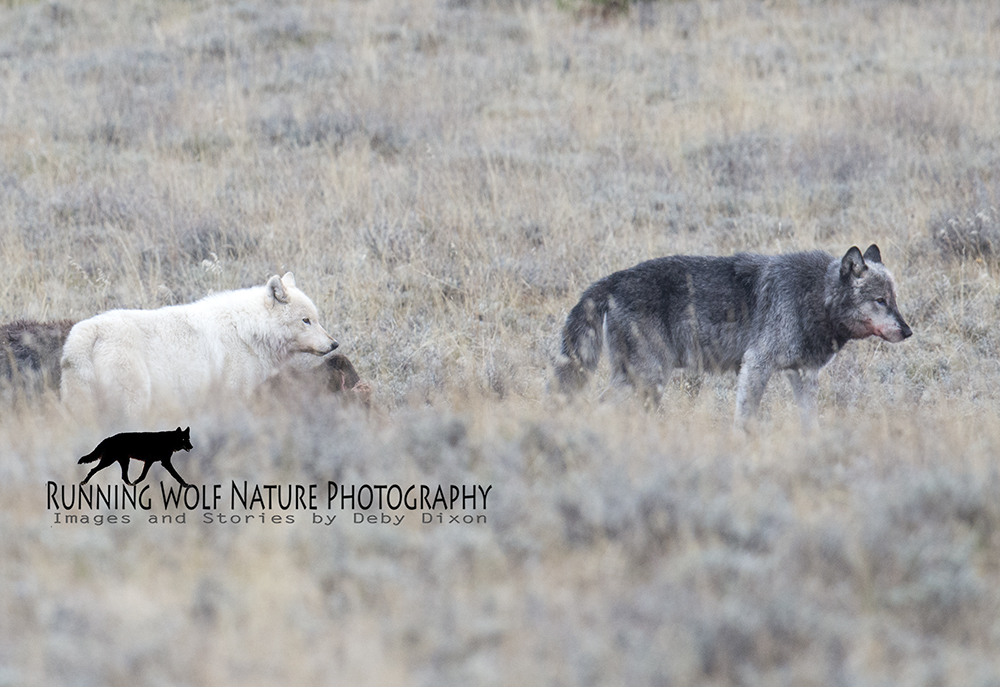 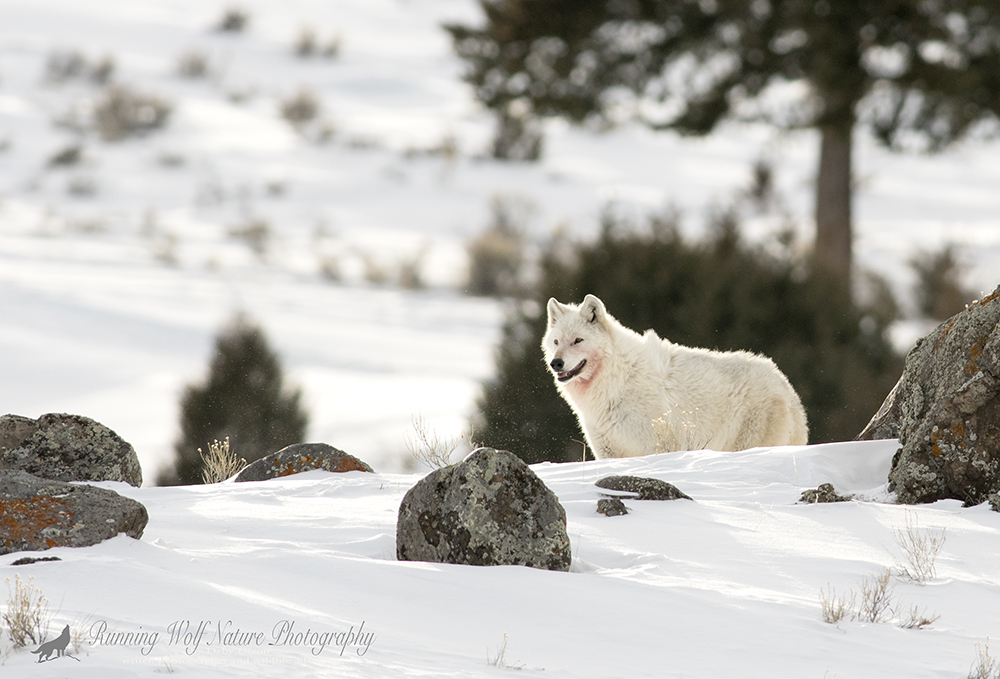 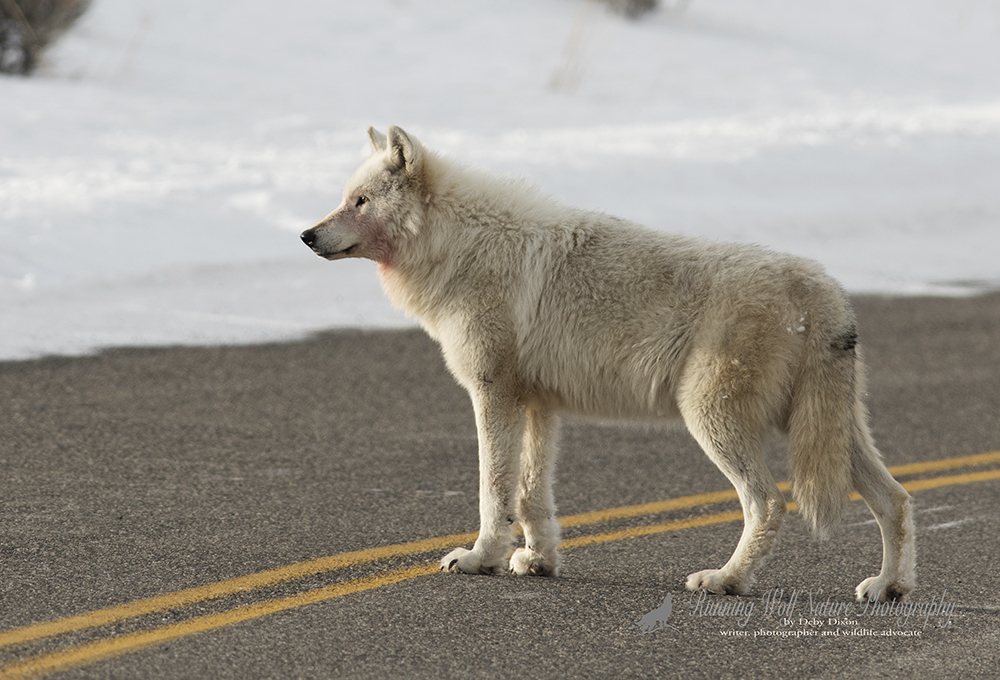 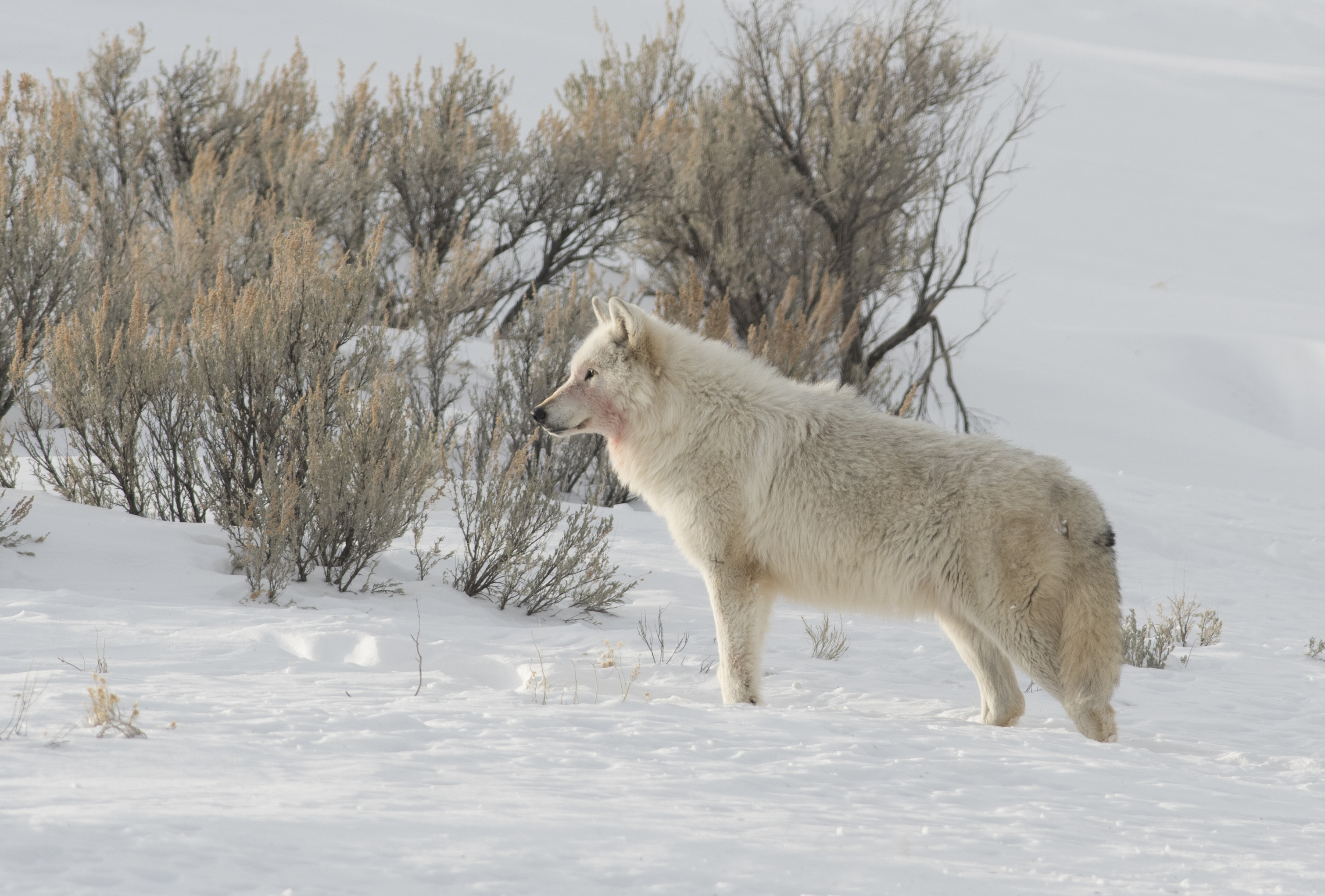 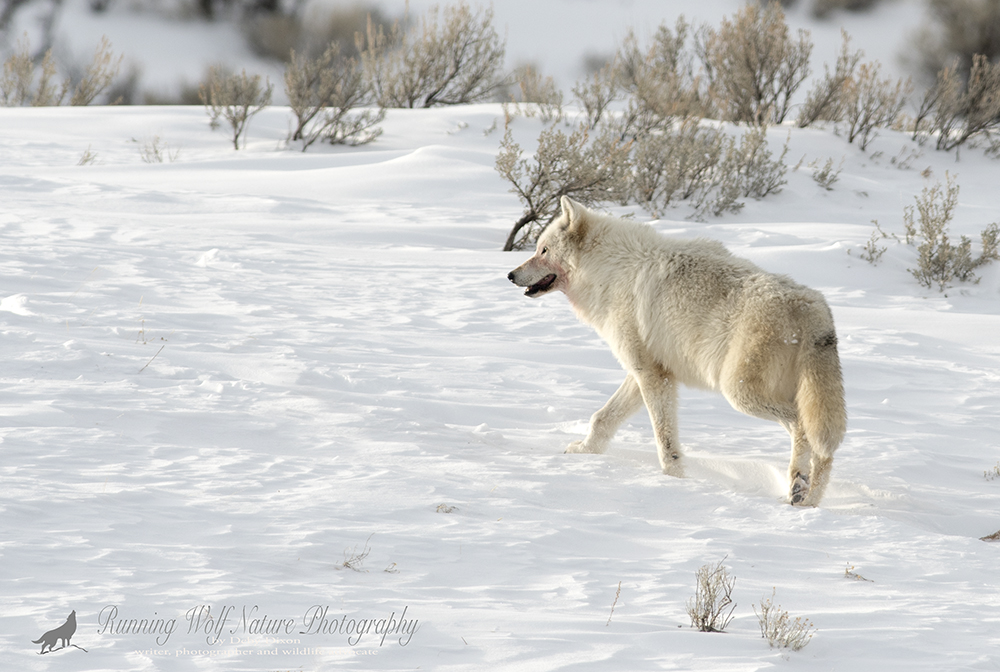 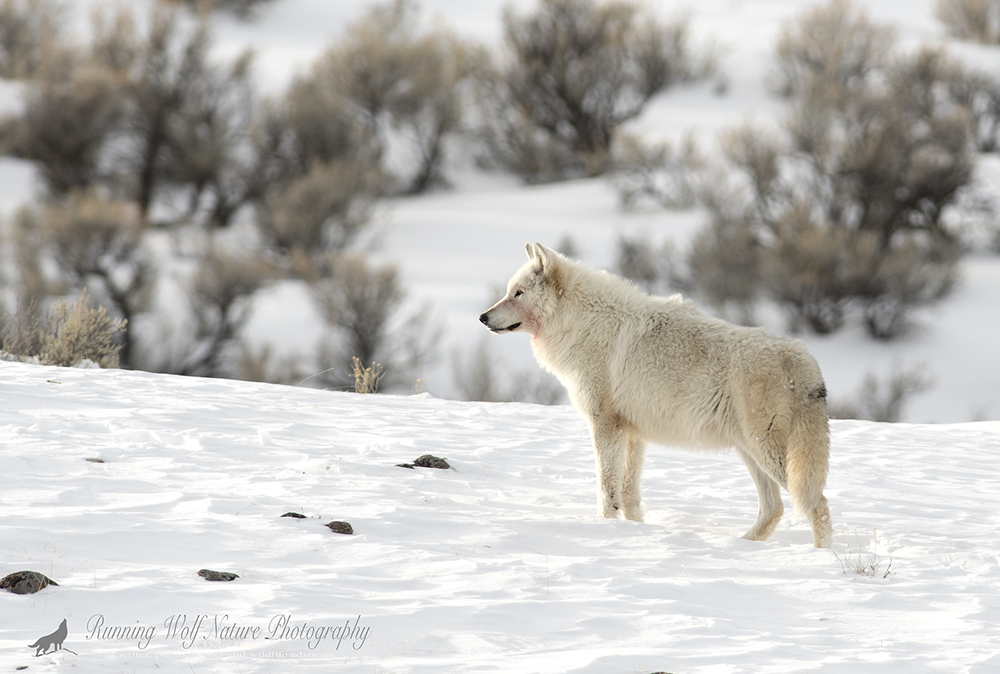 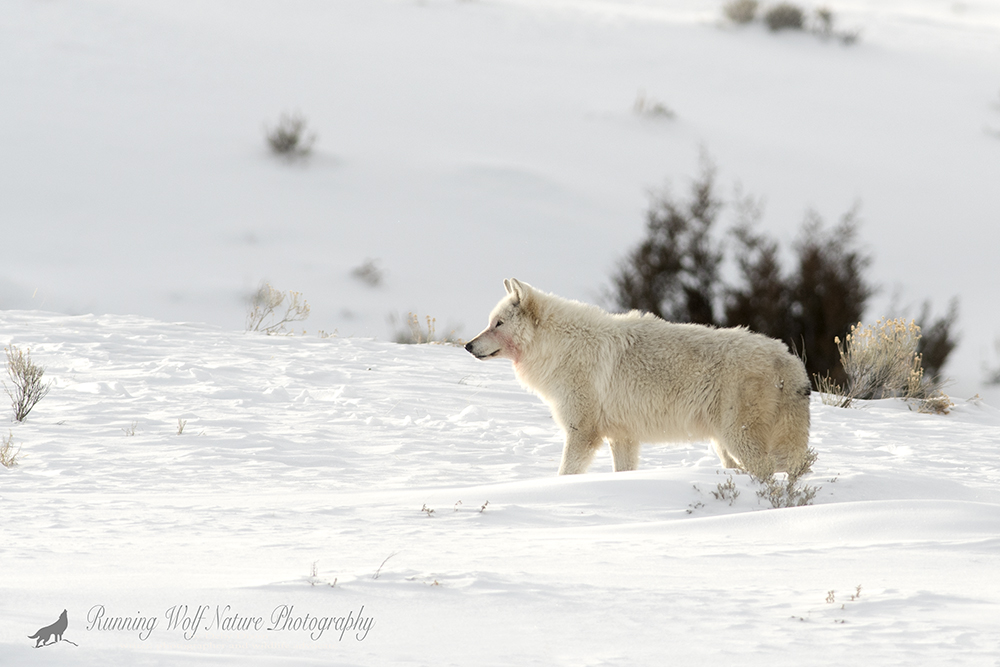 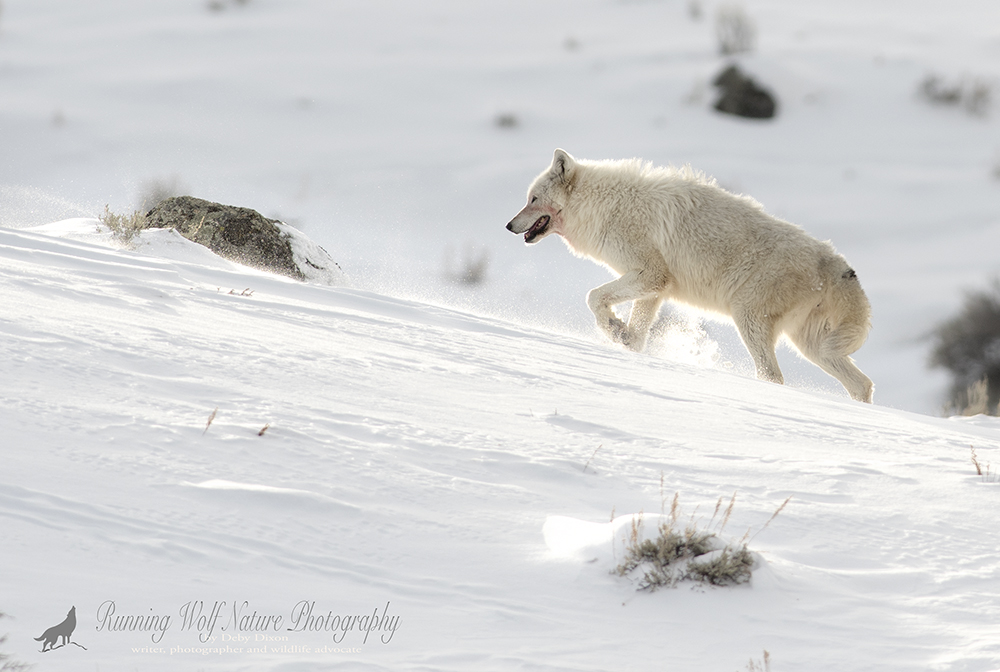