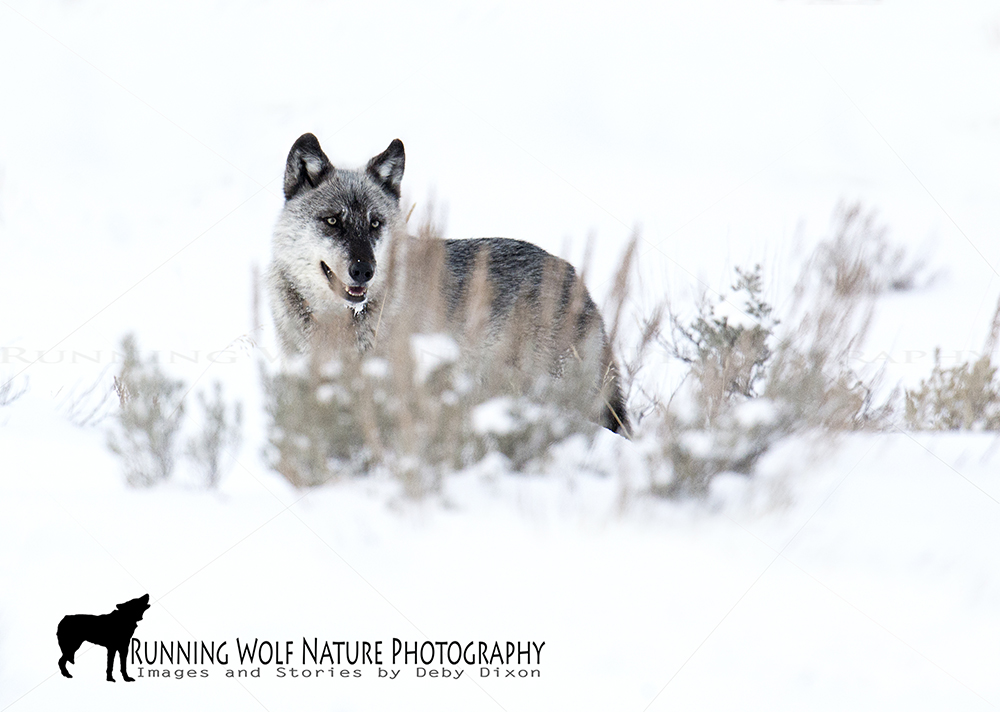 Please note:  This post was originally written and posted on my Deby Dixon Photography page in March 2013 right after these events had taken place.  All images, except the top one of 755, were from that time.  Some formatting errors occurred when I copied the post but you will find those easy to overlook when you begin reading this heart-wrenching story of wolf world in Yellowstone.

The wolf world in Yellowstone National Park was turned upside down last fall when hunters began killing collared Yellowstone wolves. The famous Lamar Canyon Pack was hit hard when its very popular beta male, 754 was killed by a Wyoming hunter but no one could have imagined what came next and the ongoing tragic story that has continued to unfold. I had no history with the Lamar Canyons, or any other wolves for that matter when coming to spend the winter in Yellowstone. By the time that I glimpsed the pack, high on a hill above the valley, 754 was already dead. On that day, I saw the alpha female, ’06, sunning on a hill with her back to me, for the first and last time. I will never forget the way that the late afternoon winter sunshine lit her beautiful coat and will never forget wanting to see her face. Only a couple of days later, on December 6, 2012, a Cody, Wyoming hunter, who some say was out waiting for 20 days in a row, shot and killed Yellowstone’s most famous wolf. They had many nicknames for her and one of those was, “Rock Star.” I have heard many a story about how well she took care of her family and could easily take down an elk by herself, by grabbing it by the throat. Hopefully she taught her family well, because they are on their own now. The three + months since the death of ’06 has seen a lot of changes for the pack but has had the most profound effect on her mate, the handsome 755M. 755 brought the entire pack back to the park for a short visit and a few snacks about a week after his mate had been killed. Only here a few days, if that, on the morning of December 13, 2012, they were seen disappearing over a mountain and heading east. A lot of wolf watchers/lovers stood watching, helpless to do anything more – their only solace was that there could be no more legal hunting in the area that they were headed back to – where 754 and ’06 were killed.

Hope was renewed one day when 755 showed up with two of his daughters, 776, the presumed new alpha female and yearling, 820. But where were the others? No one knew. Everyday that the three were in the park, people looked and looked for the others to join but they never did. And then, one day, those three left also.

And then nothing for a long time. The Lamar Valley, once the prized real estate of powerful wolf packs that I never knew was empty and it became the Valley of Death.

One morning I drove through the valley and its emptiness was disturbing. I stopped at the Foot Bridge pullout and wrote this: Soon the day will come when the wind blows, the snow will fall, the sun will shine, and the wolves will howl. But, for now, it feels like death in the Valley of Hell. I had to acknowledge the emptiness of Lamar Valley for the moment, while bravely claiming that nothing ever stays the same and soon it would be empty no more. And then, one day, 755 returned by himself, which was to be expected because it was time for him to find a new mate. Soon after his return the love story of he and 759, from a rival pack, the Mollies, began. The two wolves began their life together and soon 759 had a new collar put on her because her original one had come off. Afterwards, she stayed far away from people, on the tops of hills or on the other side of the valley. She wanted to remain wild and free and 755 was only too happy to oblige. The new couple settled into life together, roaming the valley and soon proving themselves to be a mighty hunting team. If 759 had pups and they made it a year, 755 would make Yellowstone history for becoming the first male to be the alpha of two packs. For a time, 759 was queen of Lamar and she had found her prince charming. Often, when I drove through the valley, I thought of how peaceful and quiet it was and how 759 had found her dream. She must have been so happy and content – at least that is what I imagined – for she had struck gold in the wolf world. Her own valley of greatness with the best catch in the park. As a pack of two, that liked to stay away from the humans, they were not seen much and were photographed very little. The film clip of her on top of the mountain, a dot walking off, just happened to be done when I had rented a larger lens. She was private and I honored her for that strength and independence that she displayed. I only knew her in my imagination.

Just as suddenly as she disappeared with her dad and sister, 820 returned, this time by herself.

And then one morning, sitting under a tree on a hill, was 820 howling her little heart out. 755 and 759 were gone from the valley and never heard her calls. Seeing 820 again was the most exciting thing that had happened in a long time and people were smiling from ear to ear. Many were secretly wishing for her to meet up with 755 and 759 but no one knew if the two females would get along. But, after only two days, 820 headed east once again, just as 755 was headed back to the den area. So much disappointment. And then on the following day, the Lamar Canyons with two new males from the Hoodoo pack, descended on the den. Four grays were not amongst the crowd; 820, Middle Grey, “Butterface” and a grey pup. Chaos erupted and 759 was attacked, and both her and 755 were chased out of the den area with a black pup following far behind. We watched as 755 and 759 made their way across the valley and it soon became obvious that 759 was injured because there was blood on her left rear leg. Did anyone see this coming? I don’t know. Her being a Mollie was not good because her pack had descended on the valley last winter and created mayhem everywhere they went. I have no idea who began the fight but we know that 776 and the two Hoodoo males were injured. I went up on a hill and found the pair again just as the black pup caught up to them. Watching 755 be reunited with his pup brought tears to my eyes. Even from my long distance, looking through a scope, I could tell that 755 was as happy as he had been in a long time. The pup did great work being submissive to 759 but he was full of energy, which had to have been too much for her and her injuries. I could see more blood on the inside of her leg and could tell that she was hurting. Eventually the pup calmed down and the three of them went off into the forest, where, I believe, she stayed until she died. But, that is ahead of the story. Because words can not describe how it felt to know that 755, his pup and 759 were together. I hoped that it would stay that way.

But morning came and I was the first to arrive in the valley. Two wolves, 776 and a black, walked on the road beside my car but it was still dark. As the light began the new day, I saw four wolves on the valley floor, standing and facing each other. It was a brief moment before, one by one, the three offspring turned to leave. 755 followed but soon came running back. He stood on the valley floor and barked and howled for his family.

And then 755 says goodbye to his family and leaves his new mate to finish dying in the forest. [wpvideo KZfPDyeO] And, just as they had arrived, the following day 776, her siblings and the two Hoodoo males were gone and the valley was empty. On the following day 820 showed up with her sister, “Butterface.” A happy ending to this story would be for 820 to find 755 so that he can help her with the pups that we believe she might be carrying. Come home 755! Obviously, this story has no ending and what is today may not be tomorrow. More of the story in my National Parks Traveler column: http://www.nationalparkstraveler.com/2013/03/photography-national-parks-winter-watching-wolves-yellowstone-national-park22941#comment-46095

One thought on “A little Lamar Canyon back story”