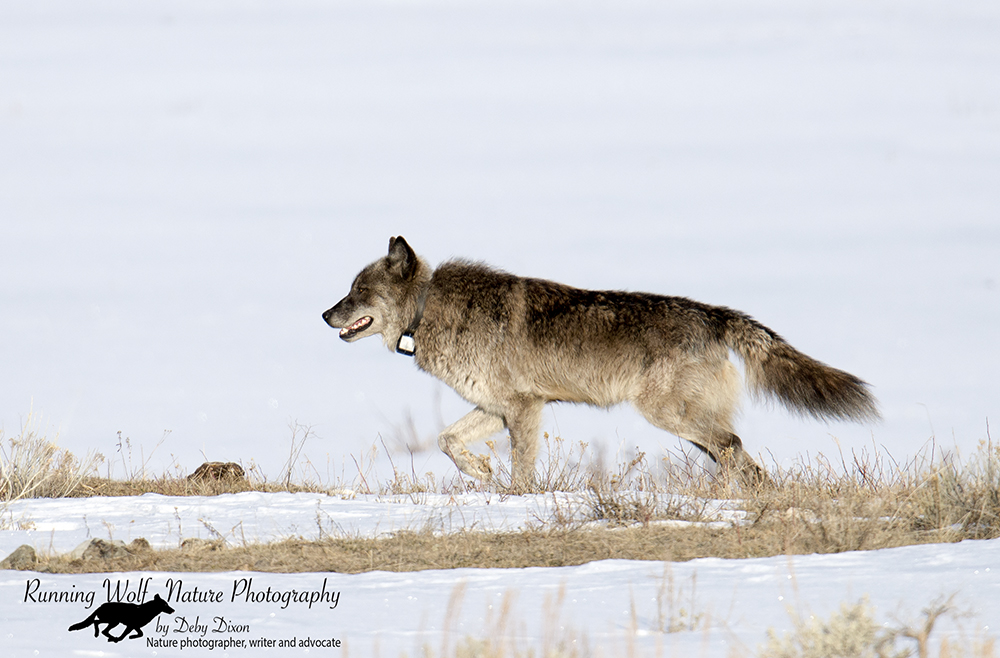 A recipe for habituating wolves?

Less than a week after we learned that Yellowstone Wolf Project leader, Doug Smith, is considering hazing wolves in order to prevent their habituation, he has collared more wolves.

Smith floated the idea of hazing the wolves after a hunter shot the well-known wolf, 926, Spitfire, just outside of the park’s NE entrance on a road in Silver Gate, MT.

In an interview with the Jackson Hole News and Guide, Smith said he wants to teach wolves that people aren’t safe.

“Smith’s pitch to the wolf-watching community is that aggressive hazing — if that’s what Yellowstone chooses — will be for their own benefit.”

“I’m trying to preserve their opportunity as much as possible,” Smith said, “and that means keeping wolves alive.”

Yellowstone wolves are collared for research purposes, which involves active viewing of the wolves, some times from the air, while some packs are viewed almost daily by people with scopes. The radio collars transmit a signal that lets researchers know the area that the wolves are in. Some collars have a GPS function and that information is downloaded to a computer, giving researchers exact locations.

Some who watch the wolves tend to believe that watching them through a scope does not habituate them to human presence. However, there have been wolves in the park that were never in close proximity to humans, being viewed at over 600 yards away on a daily basis for a little more than a month, that had zero fear of humans when they did finally come to the road.

Wolf watching events tend to be noisy affairs, with traffic, car doors slamming, people talking loudly, laughing and carrying on, people cooking meals and eating lunches, food being dropped or poured on the ground and radios blaring. When one hikes away from the road they soon discover that they can hear conversations and distinguish voices from a great distance. Noise carries and the wolves always know that humans are there. Often, wolves have to choose a travel route different than the one that they prefer, because people are in the way.

While it is a rewarding experience to watch a person’s reaction when they see a wolf for the first time, these daily wolf watching events are not quiet times, respectfully watching nature, but miserable parties of noise. There are many times when spectators can not hear the wolves howl due to conversation or wolf radios blaring.

Additionally, wolves are handled extensively during the collaring process and will awake from a drug induced sleep, covered in and surrounded by human scent. The wolves are captured by a net shot out of a helicopter. They are then injected and the handler grabs the net and drags the wolves to a location where they can be processed or transported to a central spot. They are weighed, teeth are checked and blood is drawn. Those who are doing the processing often hold the wolf’s head and pose for photos. And, there are times when the wolf gets a big hug from some of the project crew. The researchers then stay nearby until the wolf has completely recovered from the sedative so that it will be able to defend itself if attacked. Wolves have been killed by predators during this collaring process.

Everything about collaring more wolves suggests that the wolf project has no plans to discontinue its daily monitoring of the wolves, and finding them for the public. The question then becomes, are they going to haze the wolves in an attempt to make them scared of humans, and then line hundreds of humans up to watch them?

Note: I am not opposed to people seeing wolves, nor am I completely opposed to the collars – although I don’t believe that they need 7 collars on a pack of 14 wolves. That feels greedy, particularly when you are wondering what the responsible thing would be to keep these wolves safe from hunters. Perhaps if no one knows about the wolves, they won’t care if they are shot?

Wolf watching is huge business in Yellowstone and it is all about the money. Unfortunately, those of us who share beautiful images of the wolves, are probably not paying our share.

Someone needs to ask the tough questions. The idea of hazing the wolves was not well received on social media because some were concerned that hazing them would drive the animals out of the park and into the arms of the hunters. Bottom line, I believe people just want it all – wolves safe, get to see them, make big bucks off of them, and are unwilling to give up anything to actually take the action that is needed and that will keep the wolves safe – like quit watching them every single day.

The second image is Mollies 1015M being collared in Lamar Valley three years ago. Yesterday, 1015, 1014, the younger brother (Max) and Little Blackie, of the Wapiti Lake pack, were all collared/re-collared. 1104, the black yearling female with a dysfunctional collar was not re-collared. All blacks in the Wapiti Lake pack now have collars and two grays were collared last year. Six males and one female. Seven out of 14 wolves with collars. As you can see in this image, 1015 has been captured in the net (to the left).

The wolf project did attempt to locate the Lamar Canyons, in hopes of collaring some of them. They were not able to find the wolves.