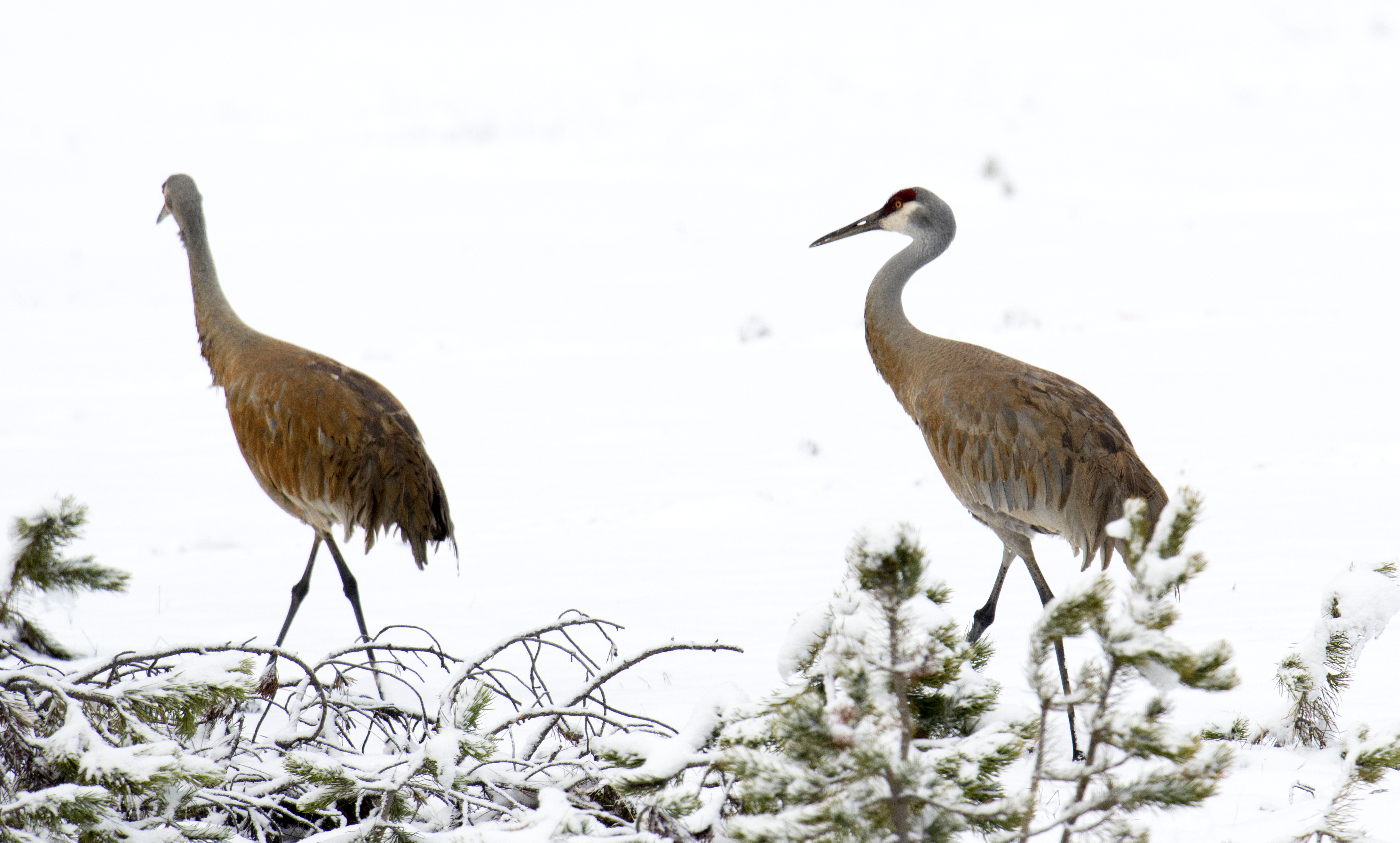 New events from today with thoughts about the Junction Buttes, and a recap of opening weekend, with lots of images.   And, a Canyon Pack sighting.  Enjoy!

Opening day weekend 2016 has come and now gone already.  The west entrance opened on Friday, as well as the gates south of the Terraces at Mammoth, and we were able to drive to Old Faithful, Madison, Norris and Canyon for the first time since November 5, 2015.  I always feel like a giddy teenager breaking through that gate for the first time in spring but then down south with a lot of snow and not much going on, I crave the northern range once again.

So, during the weekend I only spent Friday roaming the south during a nice, slow, relaxing drive.  No pressures, just pure pleasure.  I loved it.

During the drive I found a raven sitting on her nest at Golden Gate.

This was my first raven mama sitting on a nest!  One can be here years and still see new things.

And when I finished photographing mama and put the camera away, daddy was sitting next to my car, watching me.

Here is the falls at Golden Gate.  Not the prettiest image but there it is.

Swan Flat was covered in snow and not an animal in sight.  I continued on.  Daryl did tell me that he saw a grizzly at Indian Creek, along with fresh wolf tracks.

At Obsidian cliffs, or near, I found the sandhill cranes.  Seeing this couple every year has become special because they are always in the exact same spot where I saw my ver first Sandhills in Yellowstone.

There was another, new couple, up by Grizzly Lake trailhead also.

From then on, all of the way to Old Faithful, it was just a pretty, cold and pleasant day.  No sightings, though some others got lucky with a bear at Beryl Springs.

I then went to Madison and towards West Yellowstone where there was a large bison jam and people pulled over photographing them all over the place.  That was where I saw the little red dog and tried to get some shots but they were moving along the road quickly and that was difficult.  But, here are a few scenes from then. 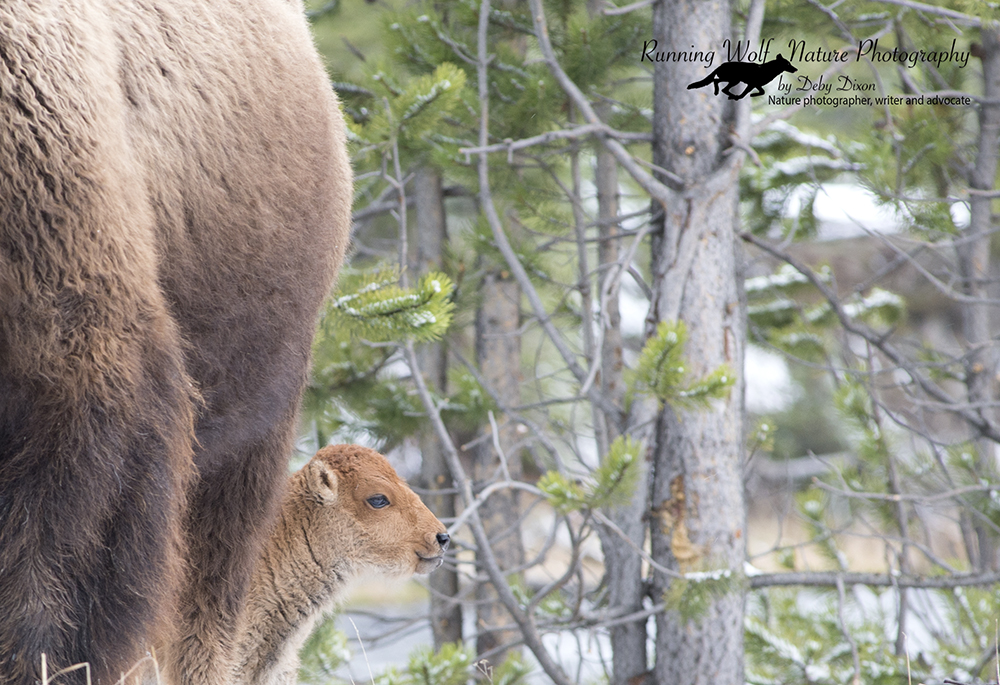 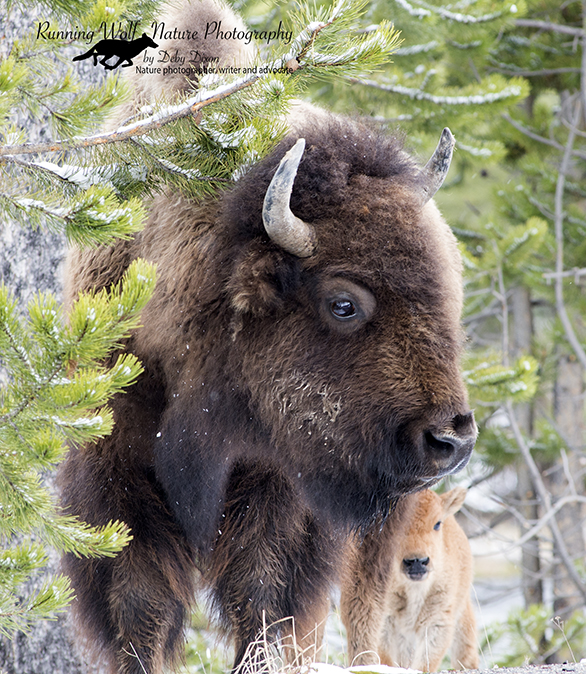 I then went to West, drove around town and didn’t see anything in particular and went back into the park.  Guess it was just nice to go to West!

On the way back the bison herd was more settled in the meadows, still traveling but pausing to eat as well.  So, I watched the little calf some more.

That calf was so much fun.

Also, on the Madison, I was driving through a pullout and heard a commotion.  After searching some I found three coyotes on a talus and had the pleasure of watching them greet and interact, and howl. 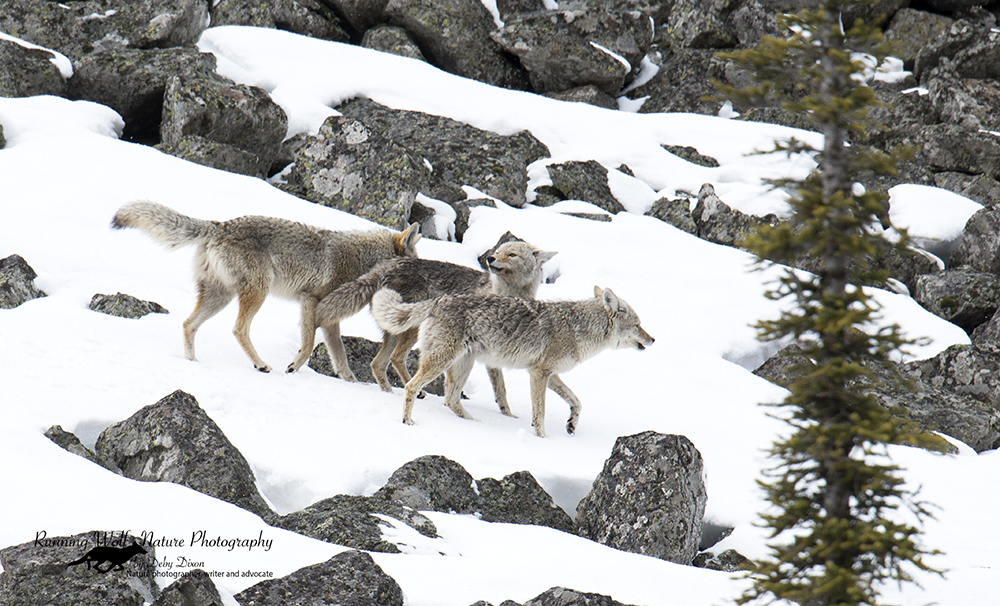 It then went to Norris and Canyon but did not see anything to photograph.  A lot of snow!  And then went home, after a very long day.  But not before hiking on the Blacktail.

I then spent Saturday and Sunday on the northern range, in Little America, visiting with friends and having a few laughs, and watching the Junction Buttes.  The wolves were the highlight of my weekend, though no great photos at all.  I just enjoyed watching the pack around the den area and seeing the pups wandering off and getting curious and independent.  I wrote about the great watching of the Junctions yesterday and some about the pup, or yearling, that was out wandering around.

Well, today we had that same yearling and a black one as well.  The light gray male tested some bison all on his own.  At one point, and this was fascinating, a bison cow sensed the wolf coming before it was seen and began getting out of dodge, choosing to come straight for us.  She knew that the wolf would not follow through the people and that her calf would be safe.  She was pretty much on high alert, as was the calf.  The rest of the herd seemed to run interference and stay between mama and calf and the wolf.

We felt as though we had saved a bison calf today and that was okay with us.

The wolf wandered through the bison and was chased some.  I think he is just testing himself and the universe right now with moms in the dens.  We thought that maybe he would go visit his mom in her den but he did not seem to do that.  970, the alpha female of the Junctions, has been abandoned by her pack and left to fend for herself and her pups, so it will be interesting to see how things work out.  Rick said that she could always carry her pups over to the Slough den if she wants.  He said that for whatever reason the rest of the pack has no interest in being where 970 is, or they don’t know.  But, one would think that those two males would be out looking for 970 if they didn’t know where she is.  Rick is going to begin checking GPS telemetry with the office tomorrow so we can find out if the alpha male, 911, has gone visiting or not.  I think that there are three GPS collars so that should tell us something.

And, last but not least, this big bison bull was snoozing near the road.

I did not get to see them but it was still a weekend highlight to hear that the five Canyons were seen down near Old Faithful at 8 this morning!  Woo hoo, mama looks very pregnant!