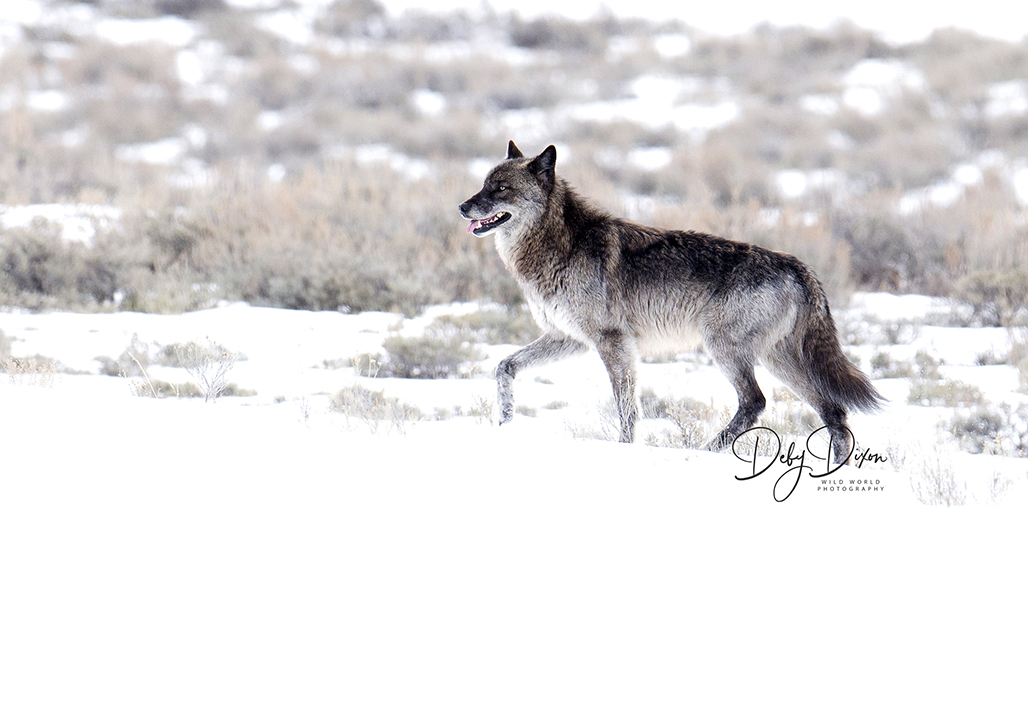 Some of you may remember Twin – he was the heartthrob of Yellowstone for awhile. This image was taken in Little America, before he had joined the Lamar Canyon pack. Twin and his brothers, all from 8 Mile/Prospect Peak packs, went on a girl hunt one February and met up with some Junction Butte wolves, including alpha, 970, who couldn’t resist his charms. 970 actually spent a couple of days with Twin, during this time, and then dumped him and returned to her pack. We never did get to see her pups from that year, which was disappointing because we all wanted to see little Twin reproductions. His pups with 926 did not survive either and he was killed by the Mollies shortly after they were born.

But, this was an exciting mating season. Twin was clearly in charge and his brothers had to stand by and watch him have all of the fun. He was with Mottled, 965 and Dark Black. Then, they lost favor with us when their pack, including them, killed 925, the alpha of the Lamar Canyon pack. It was about three weeks after that when Twin showed up at the Lamar den area and won 926 over. Unfortunately, her six pups were not impressed and they left. 926 was already pregnant when this took place. Despite all of the hard times, I was excited for 926’s future with these wolves and thought that the Lamar Canyons would grow into a big, healthy pack once again. The following year, Twin mated with 926 and T, who had returned to her mom after one of her brothers was poached outside of the park. So, two sets of pups on the way. But, neither litter survived and we never saw them. Mottled was killed by the Junctions, Twin by the Mollies, Dark Black by a bison and 965 by a hunter. And, so it goes, life in the wild.