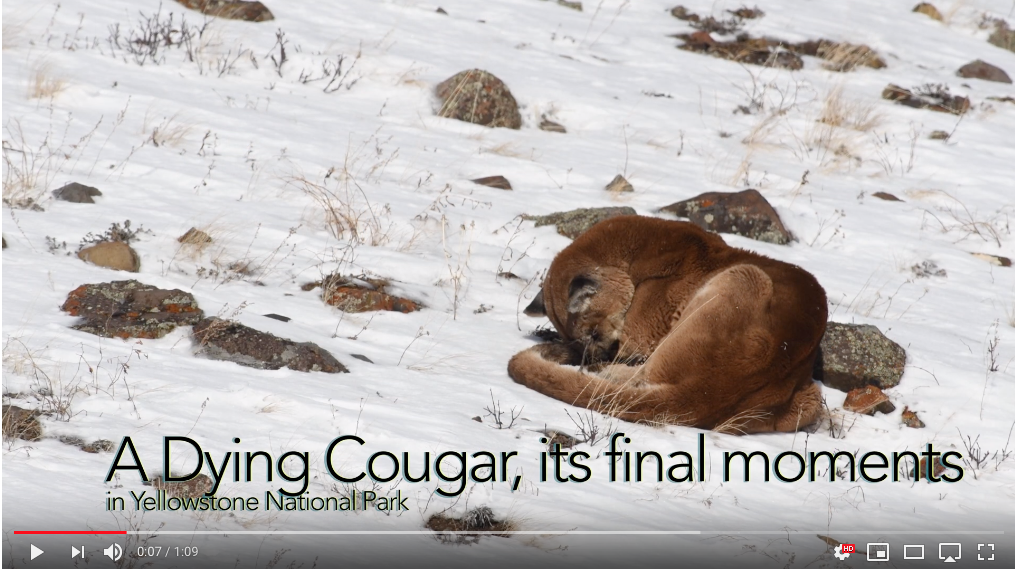 On January 8, 2019, I was out snowshoeing in the area of Soda Butte Valley, when I overheard some talk on the wolf radio about a sighting. It was my assumption that, perhaps, a wolf was visiting a bull elk carcass that the Junction Butte pack had killed and eaten a day or two before. Being in no hurry to watch a wolf tugging at the distant carcass, I resumed my hike, breaking new trails in deep snow before going to see what was going on.

A long line of visitors and photographers were standing on the east side of the road, looking up the hill. Earlier, when passing that spot, I’d nearly rear-ended some vehicles parked in the lane on that blind curve but could not make out what they were looking at, without stopping myself and so went on. I parked and walked down to where the others were and the only thing I could make out was what looked like a rock with a tail. Imagine my shock to see a cougar that was obviously suffering. I long ago made a decision to document everything in Yellowstone and so took a few photos and did a little video but this was a sad sight. Unbearable to watch this magnificent animal suffering in this way.

Rangers came along and asked everyone to move back because they were going to try to get the cat up and moving and didn’t want anyone in its way, should the feline begin running. They needn’t have worried, but, believe me, I still wouldn’t have wanted to be any closer. The cat reacted to the first shot and obviously watched the shell casing roll down the hill, but did not appear able to get up. In fact, I never did see her use her back legs.

The cat was skin and bones and there was evidence, in the way of blood, that she may have been hit by a car. In Yellowstone, the policy is that they let nature take its course. The exception to this, is that the park will intervene if the animal’s injury appears to be human caused. This cat was obviously dying near the road – she slid down the hill several times and was unable to stop herself. Perhaps the rangers could have let her die naturally, if they could be assured that visitors would not approach her and she would be left alone, but this would never happen. Someone would walk up to the cat, of that I have no doubt. Can you imagine being a wild animal, in the process of dying, and have a human walk up to you. Instead of dying peacefully, the creature would be filled with terror. After inspecting fresh blood in the road, nearby, and observing that the cat was not able to get up and run away, rangers made the decision to euthanize her.

I am not one to watch an animal suffer for longer than it takes to document, and don’t believe I’ve ever seen one as it was shot and killed. I’d always imagined that this would be a horrifying scene to witness but, in this incident, I felt nothing but relief that such a majestic animal was no longer in pain and agony, with 50 people watching her die. She twitched a little bit after being shot and someone was complaining that the rangers hadn’t done their job right, but I am guessing that this is normal for an animal, or human, that has been shot.

There are so many people second guessing the actions of the rangers, complaining that they had left wolf 949 to suffer before dying and so the cat, too, should have been left alone. The difference was that the evidence suggested that at least some of the cat’s suffering was human caused and because of that, it would have been beyond cruel to leave her there, close to the road, waiting for her to die. 949 died of distemper and was not in an area accessible to people without crossing a major river or a very long hike. I’m a little tired of people second guessing the park and the rangers when they have to make difficult choices such as this one.

After the cat had been killed, I asked rangers for a closer look. This was a wise decision, but also brave for someone who has a difficult time with dead spiders and birds, let alone big cats. She was in terrible shape and it was my opinion that she was finally at peace.

But, why don’t you judge for yourself? I have put together a one minute video of the cat’s final moments that shows her reaction to the bean bags and her inability to rise or defend herself. The final frame is right after she was shot and so this may be hard to watch. I don’t show this lightly but this is the way of nature and the workings of the national park. As a documentary photographer, I feel that it is my job to share the truth of what goes on out here in nature – it isn’t all pretty and easy. Some days are filled with reality and are very hard.