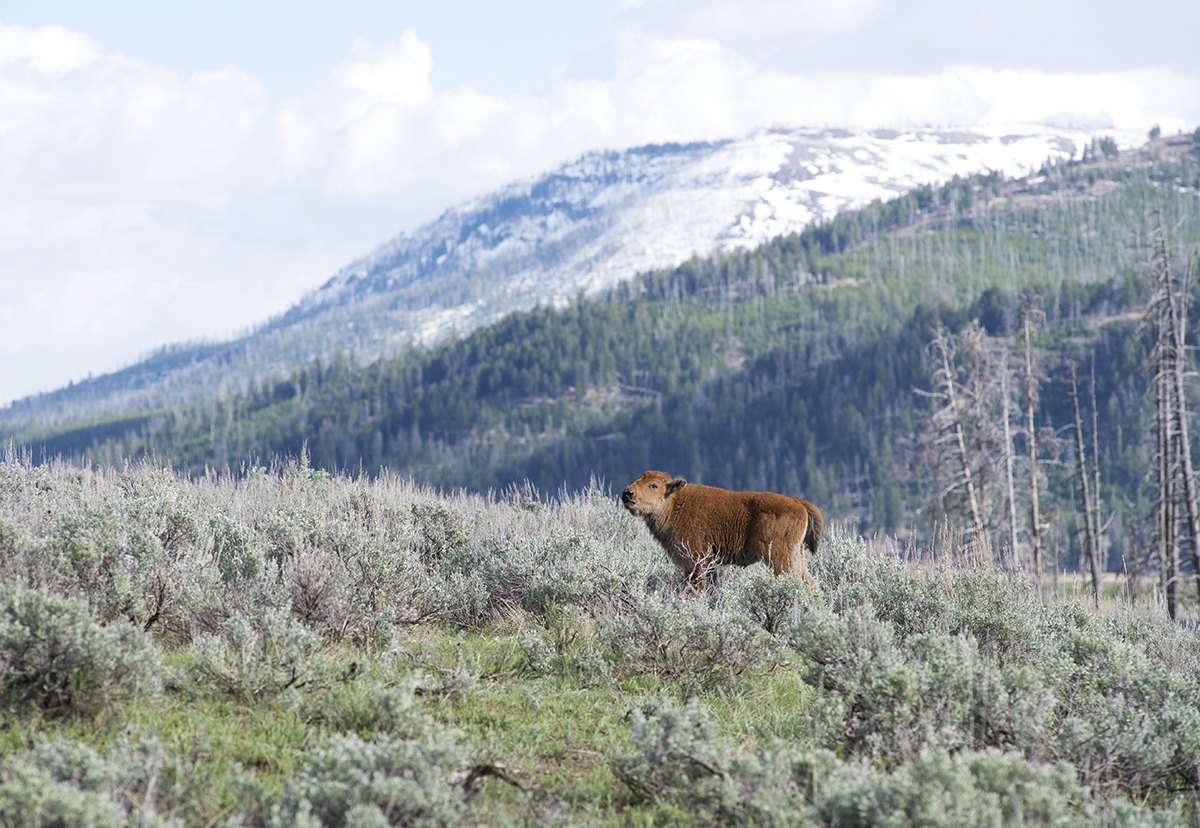 I have copied the article and provided the link to The Washington Post.

The orphaned calf in early May, days before tourists tried to rescue it. The calf remained near this spot, about 35 yards from the road, and soon it began approaching vehicles in the same area. (Deby Dixon)

Editor’s note: Deby Dixon is a wildlife and nature photographer who lives outside Yellowstone National Park. She wrote this essay after the park euthanized a baby bison that it said had been rejected by its herd due to the “interference” of tourists who tried to rescue it by putting it in their car. The tourists later defended their action, saying they were trying to help the calf. This essay is adapted from an article that first appeared on the website National Parks Traveler.

GARDINER, Mont. — I met the bison calf that took a ride in an SUV early one evening as I drove west in Yellowstone National Park’s Lamar Valley, past the pullout known as “Picnic.” The late afternoon sun on a stormy landscape provided the light that we photographers dream of for shooting gorgeous mountains in the distance and wild animals on the horizon.

I spotted the calf near the road and all alone. It was crying out and seemed to be looking for its mother, but no other bison was anywhere close by. Instantly, I knew three things: The calf was orphaned or had become separated from its mother. The calf would not be adopted by another cow and could not survive alone, and so it was just a matter of time before it died or was killed.  And I wanted a photo of that calf, in order to remember its short life.

Every year in Lamar Valley, we see bison calves by themselves, destined to perish. Their mothers might have died in childbirth, abandoned them or become separated during a river crossing. We watch as the calf runs from cow to cow, looking for its mother. We watch the other cows react with violence, particularly if the calf attempts to nurse. A wild bison cow will not adopt another’s calf. I have seen calves take up with bulls, which sometimes tolerate them. But eventually the calves are too weak to keep up during the daily roaming and are most likely captured by a coyote, wolf or bear.

Earlier this year, I watched a young calf run from herd to herd while a coyote followed behind. The calf did not seem to know that the coyote presented danger and ran right up to it and sniffed its nose. This was a tragic sight to watch: A healthy calf expending so much energy to find a home, and that coyote, always close behind. Before long, calf and coyote disappeared down the hill and onto the valley floor. To my knowledge, the calf was never seen again.

[Tourist who put a baby bison in SUV: ‘I thought it was going to be a happy ending’]

Yellowstone is wild — one of the only intact eco-systems in our country, with the plants and animals required to maintain a healthy balance. This is a place where people can come to see bison, wolves, bears, coyotes, moose, marmots, badgers, beavers and otters — all in one day and living free. Although we regulars get to know certain animals and become fond of them, they are not our pets, and we are not in charge of whether they live or die.

This might sound harsh, but is the way of the wild. It is breathtakingly beautiful and fascinating — and it is also heartbreaking on a daily basis.

I view Yellowstone as nature’s classroom. It is my belief that the wildlife of Yellowstone, when viewed by millions of visitors, are the ambassadors that will enable the survival of animals outside of the park, because they teach us to understand animals’ necessity and care about their existence. Most who come to Yellowstone do not want to see a concrete world without wild animals, clear running rivers and beautiful wildflowers.

But for most of us, it is only natural to see a wild animal in distress and want to help it survive. I have felt my heart break for many an orphaned calf, wishing that there was some way to help but knowing that it would not be the way of the wild world if I interfered. And so sometimes, I just have to walk away and let nature take its course, without watching.

On the day I saw the orphaned bison calf that would later be picked up by tourists, I turned around and went back to photograph it. By that time, it had grown tired and bedded in the sagebrush above the rushing Lamar River. I took a few photos of the calf with the mountains in the background, and I watched as every few minutes it would stand up to look around, then plop back to the ground. Tears ran down my cheeks as I walked away, knowing the calf would soon be dead. I wanted to remember the youngster wild and free, on a hill in Lamar Valley.

I saw it in the same spot over the next two days. On the third day, when I heard from a tour guide that the calf was walking up to cars, I did not return to look. I knew that visitors would be clamoring to take its photo and that they would not fully understand its predicament. I knew that some would feel distressed over the calf’s plight and want to help. But never did I dream that some people would put the calf into their car and carry it to a ranger station in search of help.

I do not condemn the people who picked up the orphaned calf. I understand and know that they thought that they were doing the right thing — because out there on the other side of Yellowstone’s boundaries, people help wildlife all of the time. These tourists could not have known that the bison calf was an orphan and that no other female bison would adopt and care for it. They could not have known that the calf would die, as nature intended, despite their efforts.

The park service, apparently not realizing that the calf had been abandoned or orphaned for several days, attempted to return it to Lamar Valley, but there was no mother waiting for her baby. Rather than let people stand by and watch this creature perish or be killed, or cause an accident by running into the road, the park service ended the calf’s life. If you are in Yellowstone long enough to see animals suffer and die, you will know that when all was said and done, this was a kind ending for the calf that took a ride in a car.

When it comes to suffering or struggling wildlife, Yellowstone has a policy to not intervene unless the condition was human-caused, though it has at times made exceptions. But for this motherless calf, there was no help.

Our job is to accept nature on nature’s terms. But to do that, we need more educational programs that can teach people just what that means. The National Park Service needs more rangers out in the park and interacting with visitors, teaching them about this place called Yellowstone that I love so much.