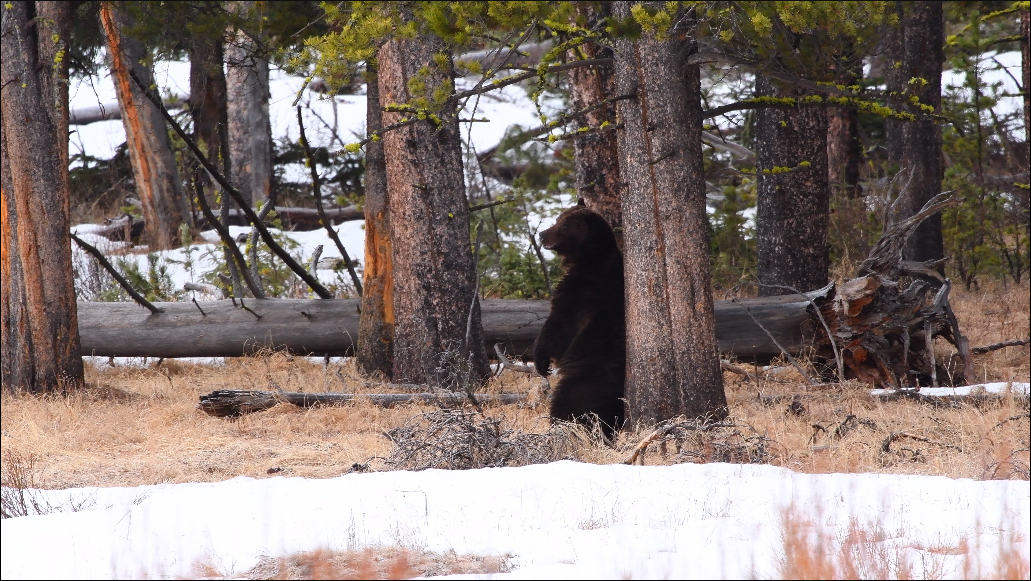 One Morning in Yellowstone

During one morning in Yellowstone, this past weekend, I encountered the circle of life – from death of the elderly due to natural causes, to the feeding of the living, to new life. Beginning during the early morning hours, well before dawn, I watched as the stars began to fade, the sun caressed the Absaroka Mountains to the east and listened as the world of nature awakened and began to stir.

For five mornings in a row, I awoke between 3 and 4 a.m. and drove towards the eastern edges of the park, at Round Prairie, so that I could listen without the sound of cars passing by, the voices of humans or the squawks of radios. I can think of no better way to start my day than to be absolutely alone in this pure sound and light, except for the creatures. Two-hundred and fifty yards away, a grizzly bear feasted upon a winter kill bull bison carcass as I stood beside my vehicle and photographed the Milky Way. I listened for the sound of crunching bones but it was too far way.

As the day lightened I could make out the shape of the grizzly standing next to the carcass and for a time it was just the two of us. On this particular morning, during the dark drive, I encountered three foxes. Two that crossed my path and one that was on the new winter kill bison carcass in Soda Butte Valley where an unseen bear had feasted during the night. Just the day before I had watched for a time as the bison was dying – forced myself to see the bull’s suffering and to know, too, that these animals feel pain. When I saw a tear roll from the bison’s eyes, I sensed his agony. I saw two animals die last week and while it is awful to watch, I urge anyone who questions the senses that belong to these animals, and their existence, to see for themselves.

As the day grew lighter I took my camera and tripod down the road to a low spot, directly across from the grizzly and was now at about 175 yards. Soda Butte Creek ran right before me and two pairs of geese made their presence known along the rock bank. Bull moose traversed the prairie off in the distance. And the birds sang. All of the sound in this video was collected during this morning – an attempt to rid it of human noises was made. Much of the sound was collected while the world was still dark.

The grizzly stayed on the carcass longer than usual and seemed content, except when cars went by. And, until, finally, a large diesel truck stopped in the road right behind me. At this the grizzly said he had had enough and wandered over to a large tree to scratch his back before meandering into the forest.

From Round Prairie and Soda Butte Valley to Lamar Valley, a new bison calf was born and its mother was still busy cleaning up and getting to know her new youngster. Wildlife viewing was slow at this point and so the new calf had quite the greeting into the world.

On to Little America, where an adult, white male wolf crossed my path beneath the Peregrines, and the Mollies were running along the Lamar River (no images shown), the grizzly cub and sow, known as the LA couple, came to the road near the Specimen Trailhead. What a sight for sore eyes that youngster was! They crossed the road and grazed in the swampy meadow on the other side, before running for the hills. Numerous people got to enjoy these two bears.

And, that was my morning in the park. I invite you to watch this video and experience the sights and sounds for yourself – see the magic and see why it is that I get up at 3 in the morning to look and listen. I always hope to learn more about the wild world, to experience more and to find ways to enjoy it that are quiet and special to me, so that my time can be shared with you. I want those of you who can not be in Yellowstone, to experience some of the wonders.

I sit back these day, following the wolves in a casual way, being careful to not spend too much time interfering with their lives.  I’ve looked into the eyes of too many wild animals, while watching them go about their days, and can not help but think of the hope that they possess for another day at life – to bear their young, raise their families and fend off the competition.  The sense of this is profound and runs so deep I barely know how to articulate my thoughts.  I can’t help but think that us humans are using and abusing the wildlife that we encounter, without regard for their feelings.  Meanwhile, I bear witness to a whole lot of pettiness in the park – worry about what this person or that person is doing.  No doubt that those worry warts are missing much of the beauty that surrounds them, but they are also robbing us of our experiences.  I pray for peace in Yellowstone, and to see the day when the animal, not the dollars, the watching or the photos, is most important.