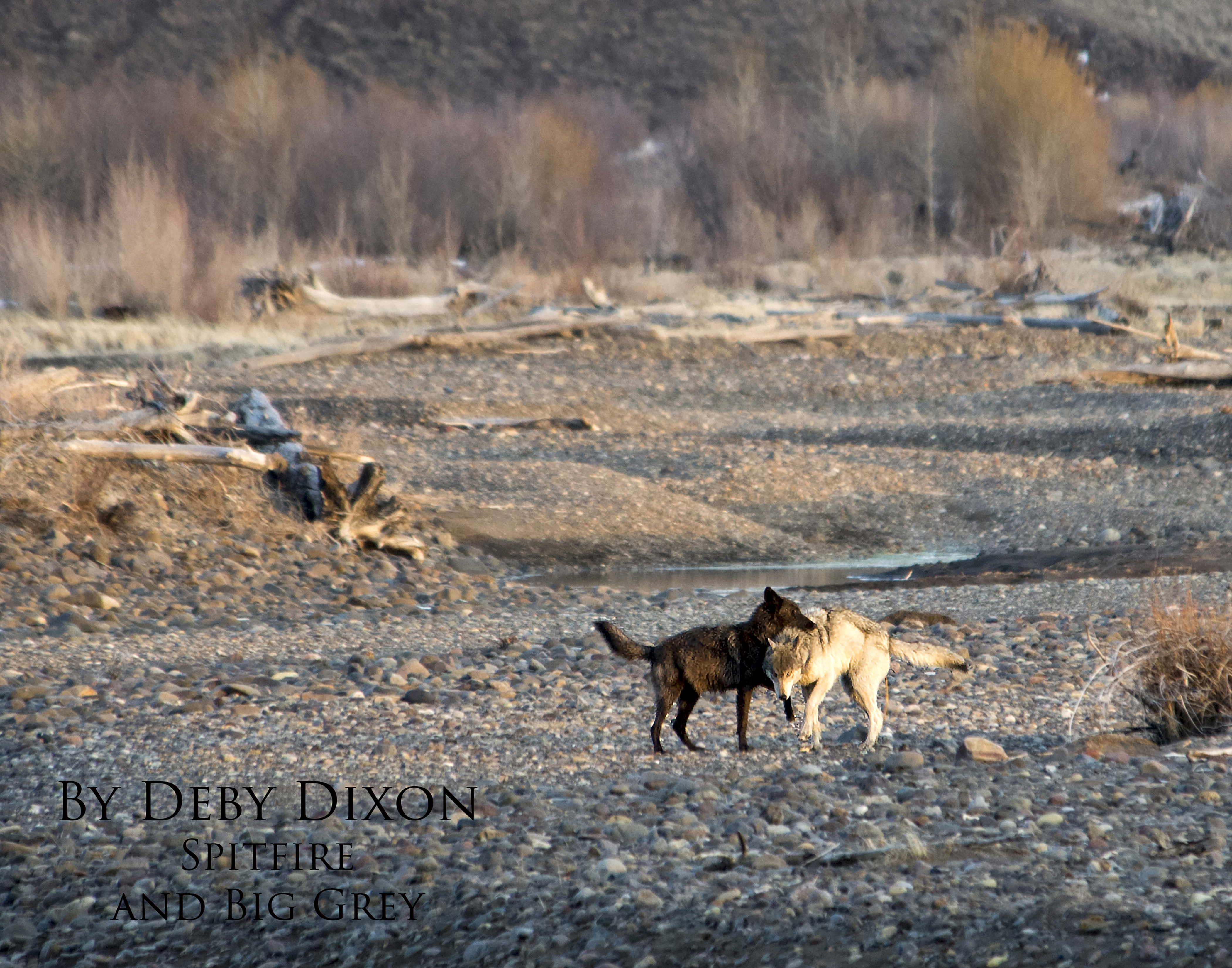 Late April of 2013 and I’d been visiting Yellowstone National Park nearly everyday for six month, in my quest to learn the “truth” about wolves.

The Lamar Canyon pack had undergone some major changes 5 months earlier when the alpha female, 06, was shot and killed in Wyoming. Most members had moved outside of the park to start their own pack or packs. But, one gray female, known as “Middle Gray,” had returned to Lamar Valley, alone and pregnant.

I found Middle Gray one morning, at the confluence of the Lamar River and Soda Butte Creek, where she was hunting a young bull elk. The elk was standing on some rocks above the road when I first spotted him. He suddenly vanished, only to come down and cross the road and dive into the Lamar River, a minute later. A gray wolf soon followed him. No one knew that Middle Gray was back in the park and so all watcher visitors had gone west for the day – it was just myself and two friends from Spokane, WA, in the beginning, watching the drama of a lifetime as it unfolded.

Middle Gray was able to kill the young elk during the night, after all of us had left – the scene eventually drew quite the crowd, from enthusiastic and delighted photographers and filmmakers, to very angry wolf watchers who didn’t like the fact that the rest of us were being allowed to to watch the hunt.

Some time after that day in March, Middle Gray’s sister, a nearly two year old black female, returned to the valley. Only Middle Gray was pregnant and her sister, later named, “Spitfire,” by visitors, was there to help. I was out there every day, watching the new lives of the Lamar Canyons unfold, just as I had been while waiting for some of them to return to the park, after 06’s death. Soon, a large goofy looking gray male showed up and, by default, he was declared the alpha male of the pack, while Middle Gray, due to being pregnant and one year older, was designated as the alpha female. Spitfire was the funky, energetic “little wolf that could,” in my mind and I never doubted that she was actually the alpha. But, that was just gut instinct, because, what did I know about wolves, packs, sisters, puppies and all of that? I was there to learn.

Well, Spitfire was in love with the big gray male, who had become known as “Big Gray.” She flopped over him and followed his every move. From time to time there appeared to be some jealousy between sisters, but it was clear that Big Gray belonged to Spitfire.

On this particular day, Spitfire and Big Gray were out along the Confluence, by themselves and the large male was being tolerant of the young black gal’s constant affections. The day was fading into a beautiful evening light that shone on the two wolves and took my breath away.

Like always, I had hoped to get some decent shots of the wolves but they were too far away. As they made their way towards the den area, Big Gray slipped off and stayed away from people. I went to the next pullout, in hopes of possibly capturing the pair of wolves as they traveled home, but neither every reappeared and I was heartbroken.

What I did not know was that Spitfire had come to the road and crossed, in between lots. As a consolation prize, I got out and attempted to photograph the enormous full moon rising over Norris mountain. I worked on getting the shot for awhile, before giving up – nothing was working and it was time to go home. And, so I returned to my car.

Another visitor came by to tell me that the wolf was somewhere above me and I just nodded, disappointed that I had not seen her. I got into the car and began to pull off when something above me caught my eye. What I saw couldn’t be real! It was a black wolf, just above me, watching my every move! This was just too amazing and unexpected to believe, but it was true.

The light was fading fast and my lens and camera at that time were not good for low light conditions. Nor could I prop the camera on top of a bean bag, positioned on my drivers door frame, without getting on the floor, to aim straight up. So, after a lot of fumbling, figuring the wolf would leave, I finally managed to get the bean bag over the door frame and take some photos of the wolf. So new and so desperate was I to capture this moment, I activated the on camera flash and soon realized, when she jerked her head in my direction, that it was not a good idea.

Spitfire, just laid there, quietly, and watched me, as if I was an interesting show. She displayed no fear of me – maybe amusement – and not one single other person knew what was going on. The wolf would watch me for a minute, and then lift her head to howl at the full moon. In my mind’s eye, that picture of a wolf howling at the full moon, formed in my brain but there was no way of capturing in the camera. After howling, she would again look down at me. I did not know what to think, or why she would choose to be near me, but was in complete and total awe of her presence. It was as if she were to say to me, “you will remember this moment, always, and will fight for the lives of wolves, from now on. I knew that I was a goner – that the gift she had given me was special and one that was not granted to many.

Probably more than five minutes passed and several cars had gone by but no one had noticed the wolf. And, then, someone did see her and they stopped. And, more cars stopped. Spitfire looked at the new visitors and no longer felt comfortable with them close by and so she rose and walked off about 20 yards before once again lying down to watch me. It was then that I knew for certain that Spitfire had chosen and trusted me. For whatever reason she wanted to keep watching me but did not want the others around.

Over the years, I had a few special encounters with Spitfire – just her and I – but nothing ever quite equaled the moment when she was on the hill with a gigantic full moon on the eastern horizon. On each encounter, she found me, I did not find her. At other times, when a line of cars blocked the wolves from crossing the road, and I was somewhere in the middle of the chaos, I would watch Spitfire as she went from car to car, looking at the driver and moving on. Then, she would come to me, look at me, and cross at my bumper – every time. Even Middle Gray and Big Gray (who didn’t like people at all) chose to cross at my bumper after inspecting a line of cars on the road.

No, I don’t know what any of that means. In my opinion, wolves are very intelligent animals that learn to identify vehicles and certain people, and they do decide where they are safe. I’ve seen Spitfire run from a particular car, only to feel comfortable around the next one. It really isn’t for me to know, but she was right about one thing, I will never forget that moment, nor her.

On November 24, 2018, Spitfire was shot and killed by a hunter in Silver Gate, Mt. She took my heart and many memories with her and I will forever be grateful to know her for six years.