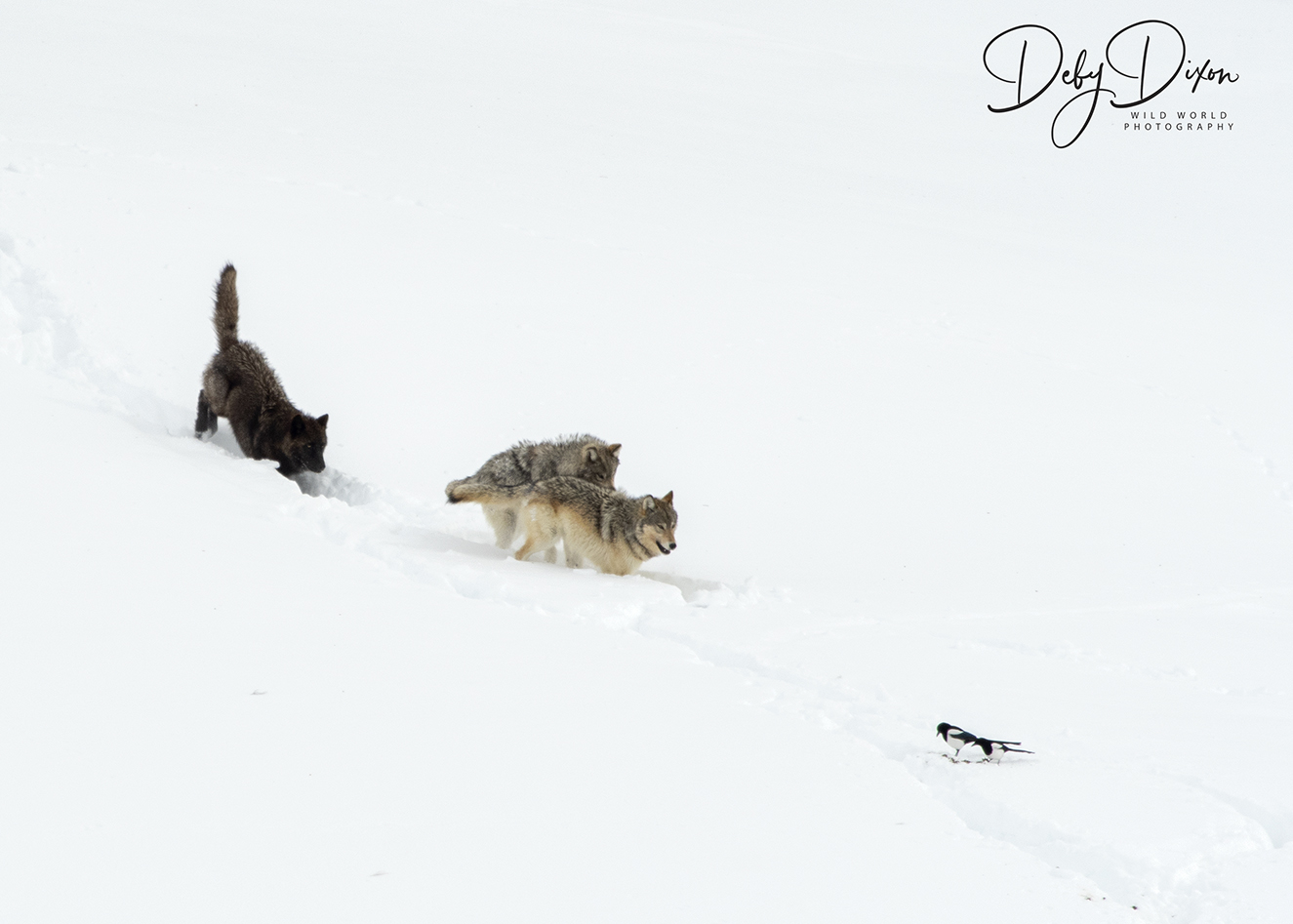 Some viewable, fun wolves at last.

This is three of the four wolves that had a fresh elk carcass in good view yesterday morning. They had left to go hide for the day, with numerous photographers fresh on their heels and blocking them in the road, by the time I arrived. So, the only wolf I saw yesterday was 1118, coming in from the east, no doubt hot on the trail of the carcass but I never saw her come in to eat.

The wolves were on the carcass first thing this morning, according to rumor, and I saw three of them to the east, very briefly. I then went east where it was beautiful, covered in white, but very few places to park due to more than a foot of new snow. Heading back I ran into numerous bison and saw a few coyotes, one of which was begging for food.

I was on the way home when I heard that the wolves were back at the elk carcass and was surprised to get a parking spot in that location. All the wolves left at one point and I was going to take off when these three came running back down the hill. I grabbed my D500, with a 500 ƒ4 (non VR) and 1.4, and took some shots handheld. At about 300 yards, I’m pretty pleased with this one – wolves running through pure snow and close enough for some detail, has been on my shot list.

There is some confusion about which wolves these are, due to a lot of disruption amongst the packs this year. I am not all that familiar with 8 Mile wolves, though many of them have had some distinctive markings that these wolves lack. I would say there is a very good possibility that this is two pups and a grey adult female from the Wapiti pack. The fourth wolf was also a black pup and the pack had 4 black and 3 grey pups this year.

Apparently, the Wapiti Lake female group had two members collared just last week, a gray yearling female and a black female pup. So, it would not surprise me if they became a little scattered. The interesting news with the Wapiti wolves is that beta male, 1014 (he was the oldest of the three brothers and does not have white on his face) returned to the female group. The alpha male (1015), the younger of the three brothers, now 1155, Little Blackie (now 1156), and 1105 (a two year old gray male) are now with the 8 Miles and are being called 8 Mile wolves. One thing to note with the 8 Miles is that the alpha male, 962, was not killed by the Wapiti wolves as has been reported by other sources – he was killed in the Montana hunt in January. 962 was originally injured by the Wapitis when they were on the Blacktail in December but returned to his pack. Then, he encountered the Wapiti males again and he dispersed. He was well outside of the park when he was killed.

Another Wapiti 2 year old gray male, 1106, has joined the 8 Mile sub group as their alpha male. The previous alpha was killed in the local wolf hunt and for a time that group and Crevice Lake hung out together. They are once again two different packs, though I’ve heard little about Crevice Lake in awhile – just some signal information but no sightings.

Both alphas from the Cinnabar pack have been killed by hunters – they had two litters of pups and their current status is unknown.

Five members of the Cougar Creek pack were also collared last week – the current total on this pack is 10. A remarkable comeback!

Four alpha wolves and 926 have been lost in the hunt this year, causing a major disruption of the packs. Also, 1118, the limping gray female, was the alpha of the Cub Creek pack but she lost her position. In other words, wolf world is in utter chaos right now and until the wolves den, no one will really know how the chips fell. Only two packs are being monitored during the Winter Study this month, Junctions and 8 Mile. This is due to the shutdown and being unable to hire people for the study. Luckily, several people who participated in the last study wanted to come back and so they were able to put together two crews.

Some telemetry information is still being given to some folks but, ideally, that info should be limited and none of it should be sensitive. Everyone should be provided the same information.