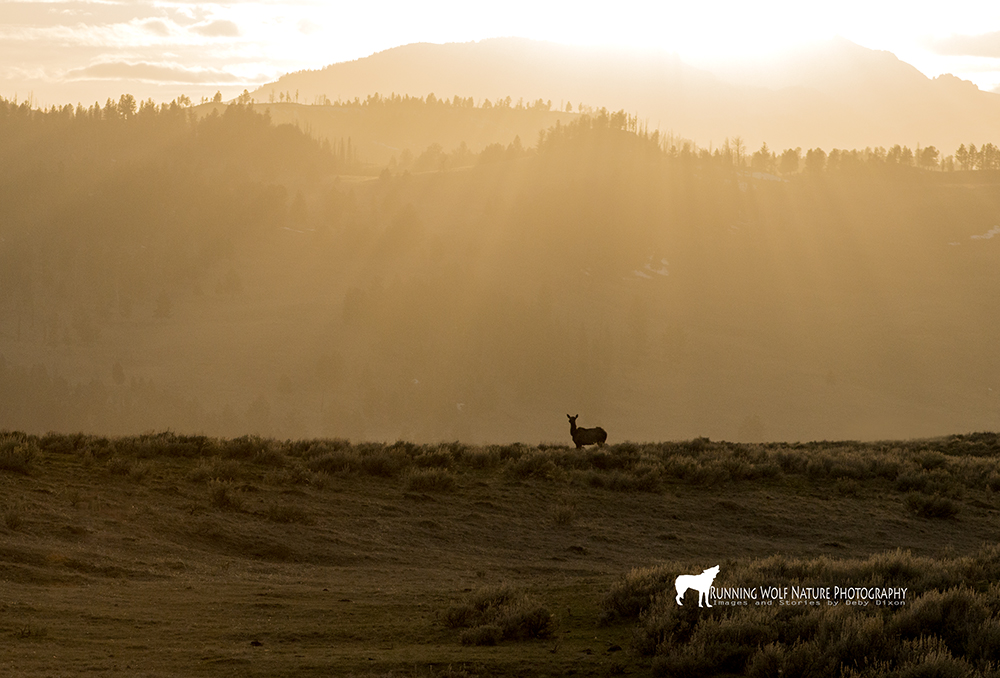 At this moment I am sitting with one eye on the Lamar den area and another on this computer.  Holding vigil – hoping and praying for a sighting and a miracle.

I pulled into Foot Bridge just as some RVers cranked up their generator, put the chairs out and opened their pullouts, in preparation of a night of camping in Lamar Valley.  My nerves are frayed already and the generator crashing its way into my thoughts  and the sound of the wind as it blows across the trees and the sagebrush was just too much.  I did not feel like being robbed of my moments with nature tonight – or of my thoughts and worries over the future of the Lamar Canyon pack – or of Spitfire specifically.  Without a doubt she is a survivor and she will make it through but her many losses in less than two months time make me sad.

How does she feel about the losses, only she knows.  I am projecting my own emotions onto a wild wolf.  But, I see these animals – I watched her from the beginning of her love affair with Big Grey, through the self-sacrifices for her sister’s pups and then their disappearance, along with that of her brother, Prince.  I watched her and Big Grey cement their relationship and operate as a team and saw them gain health and beauty.  Saw her belly grow big with pups and then I watched everyday for so long, waiting for the first glimpse.  Wondering, did the two adults succeed in keeping pups alive and how many were there.

But, long before all of that happened, I sat day after day in Lamar Valley waiting for a glimpse of Spitifire and for the moment the Lamar Canyon pack would rebuild and fill the valley with howls.  No one sat with me on those long days.  She was just one wolf, without a collar, and not much was expected of her.  But I expected her to be a great wolf and she is, even through all of these hard times. 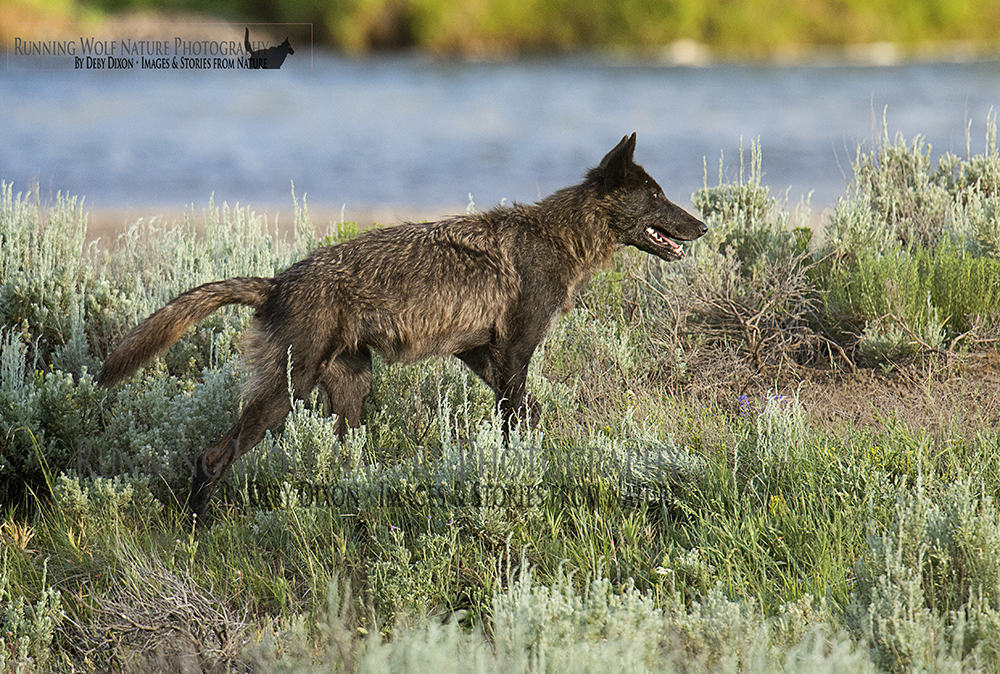 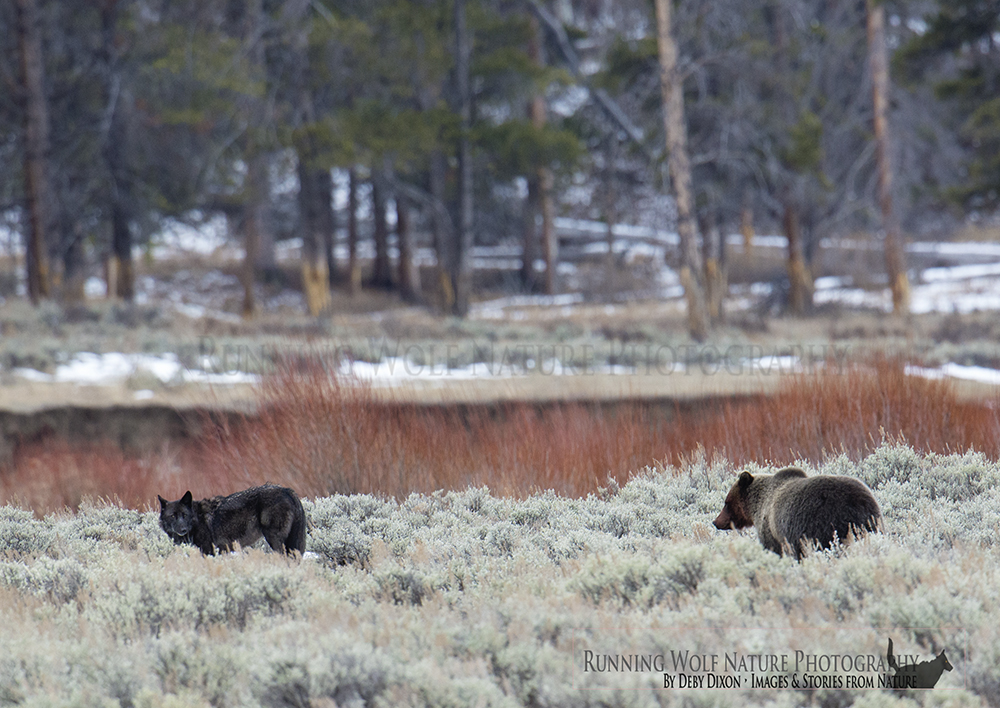 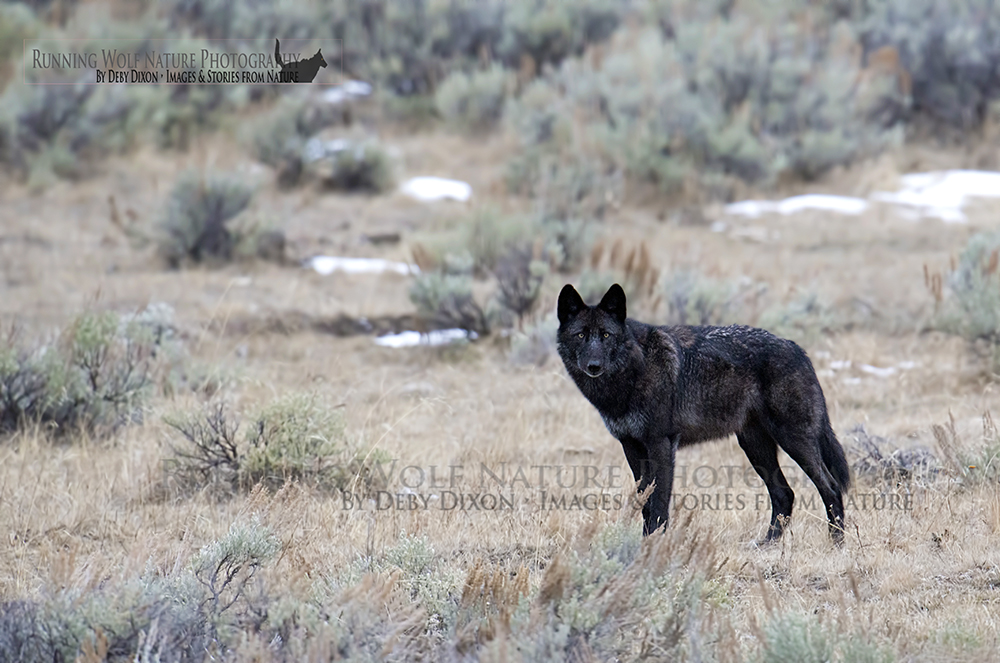 Was thinking today, when the emotions hit hard upon the realization that Spitfire is now alone.  Her pups are gone to somewhere and the four males that came courting her 5 weeks ago have returned to their pack – the Prospect Peaks.  I was thinking that her and I are similar in some ways.  So very strong and independent.  We are willing to do things ourselves and unwilling to depend on others for any help.  Yet, we yearn for love, comfort and a rock to lean on, but our strength and independence won’t allow us to let down our guard long enough to ask.  Were we born that way or is that self-protection a result of the hurts and losses that we have endured?

Maybe, in Spitfire’s case, she was born that way.  I did not know her mom, 06’, and so can only go by the stories I have heard about how she pretty much did everything herself.  And, maybe the loss of her mother – being witness to her and her uncle being gunned down – deepened her natural instincts.

In my case, it was definitely the results of many hurts – of a father who did not like me and the subsequent years of bending over backwards to do something to please him only for it to never be good enough.  I had no one to count on, to lean on and was afraid to show neediness and so I built an independent wall so thick it will never be penetrated.  Not even in my later years when a shoulder to lean against would be so very nice.

(I just saw Scarface and for some odd reason his presence fills me with comfort).

And, so I don’t know.  Rick says that wolves are more like people than any other species and I believe that is true.  Maybe we love them and fight over them so much because we seep bits and parts of ourselves in them.  I do know that to see a pregnant mom, left all alone through no fault of her own, hits me hard.  I feel the loneliness and helplessness, while also feeling the determination to make the impossible possible.  I would not give up and don’t believe she will either. 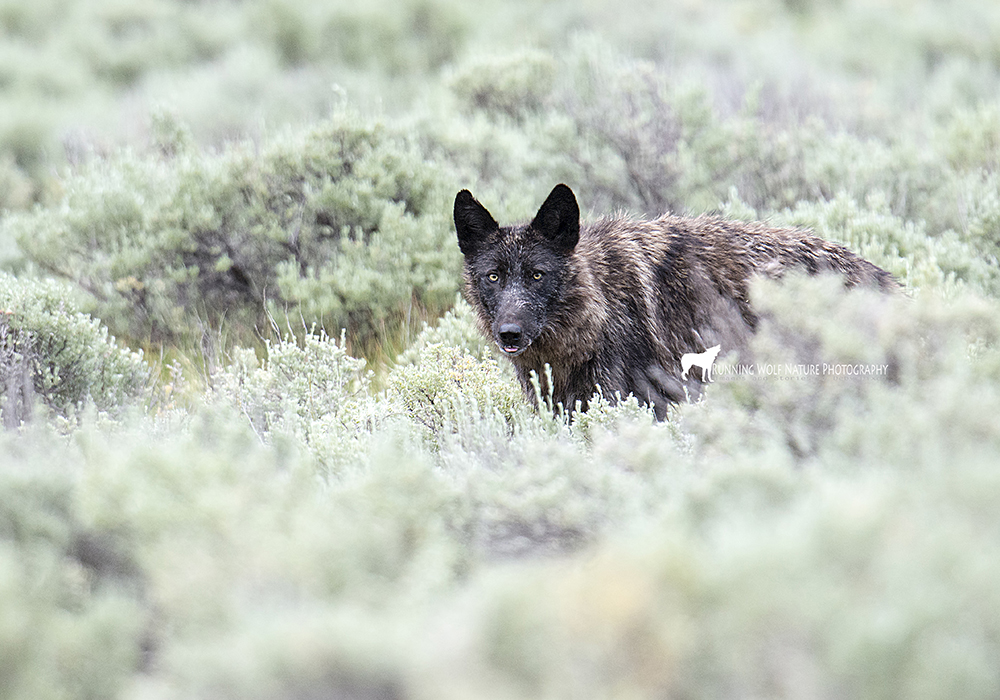 I do know that all of these thoughts and feelings about Spitfire have come from many hours of watching her over the past two+ years.  Not watching her from the comfort of my computer but while being out in all kinds of weather, through long days and many miles, and seeing her through my own two eyes.  I have looked into her eyes more than once, because she chose it that way, not because I pursued her.  And from writing the many stories of her days, which I have shared with thousands of people.  And because of those stories so many more came to know the she wolf that we call “Spitfire,” and they love her also.  My observations and stories of this little black wolf have brought her to you like no one else could possibly do without the long hours of waiting and watching.

What I have brought has been the truth – the good, the bad and the ugly.  Oh, how I wish it were possible to fill you with pretty stories about my favorite wolf, where the ugly green monster never enters her life and robs her of any joy.  How I wish it were possible to only always tell you the beautiful stories of nature but that is not the reality of what I see out here.  If I were reading about the lives of these animals on the computer, instead of watching their pain and suffering – or their love and joy – with my own two eyes, it would be so much easier to keep things light and pretty.  But, I can’t dismiss what I witness.  At heart I am an educator and something in me feels like the truth is important – that for others to fully understand nature they need to know about all aspects, even if some things are unpleasant.  And, I don’t feel like our anti-wildlife folks will take us seriously if we gloss over the truth about the animals.  There are still some out there who don’t like to be lied to and who value truth and honesty when making important decisions.  In reality those are the folks who should be following my work, not those who simply want to be entertained with pretty stories, because the facts of my observations will often disappoint.

And, so while I sit here and wait for a glimpse and a miracle, mourning the many losses of this little black wild wolf, even though she might be just fine, I can’t help but think of how very difficult and emotional it is to be here watching the lives of wild animals.  In many ways I love the powerlessness of nature and that there is nothing that we can control in this environment, while on the other hand I want to see them thrive with fun, families and good food.  Which is ironic because often my favorite animals kill my favorite animals for food.

In some respects I am confused and surprised by my own level of emotions, that have built up since the death of 925, because I like to be reality based by accepting what is, right now.  But, I wish for better things, which is human nature.  And, some will fault me for bringing my own emotions into the trials and tribulations of this wolf but I am the one here experiencing the moments and there have been a lot of ups and downs.  The truth is that there have been days when I have wondered if my heart can take any more reality.  The disappointment and sorrow have been relentless.

But, it is not just the lives of the wolves out here that make up the harshness of reality in the park.  Just today I was thinking that Yellowstone is a horrible place to be for a person who dearly loves the wolves and wants to watch them, photograph and learn more about them, if one is not accepted in the group of friends who come here just to watch the wolves.  Many of the people are very nice and wonderful but some are so nasty and possessive – so dishonest and selfish, that they make it ten times harder for others to enjoy the wolves than it needs to be.  It is as if they believe that they own the animals and that they are part of the exclusive club who gets to really know the truth about them.  Unfortunately, for them, that is not true, we are all entitled to equal access of the wolves.  But getting them to behave like we all belong here is an impossible task and they have years of practice at making things really hard on those that they do not want around.  I am told that many, many people have been run out of here and away from their passion of the wolves due to this nastiness and can certainly see why.  I have a choice and that is to stay where the wolves are and fight this nastiness nearly every day, or to leave.  Which would you do?  I believe that even the strongest of people would eventually cave because they would wear out from trying to stay upbeat and positive with determination to enjoy watching the animals they love so much, while all the while fighting for information about where they are or what is going on with them.  I am more fortunate than most because I do have ways of getting the information and do know that I am entitled to it as well, but it still takes a lot of effort.

Wolf World is a hard place, not just because nature is tough and cruel, leaving us with a lot of disappointments, because human nature is mean, nasty and dishonest.  My hope is that one day everyone will get to enjoy these wolves equally and with little effort, except for finding them.  That the sight of a wolf running across Lamar Valley, or the sounds of a pack howling in the early morning, will be filled with only joy and a yearning for more.  And because that hope is strong and I believe that when it comes to fairness, it is our right in our national park, I will continue to educate people with the truth.  My hands are already dirty with fighting this battle, even though it has been fair and honest on my part, and I will continue to let people know that no one in Wolf World is any more special or privileged than anyone else.  If that, the truth, makes me a pain in the ass and keeps me unpopular, than so be it – my belief in fairness and honesty is way bigger than my need to be well-liked and surounded by friends.

At the end of the day, I want to know just how much us tough women can take from life’s let downs or the cruelty of humans, before we just don’t want to be anymore because everything we love and care about is yanked from us?  I so imagined that this would be a much kinder place…

13 thoughts on “Holding Vigil in Lamar”