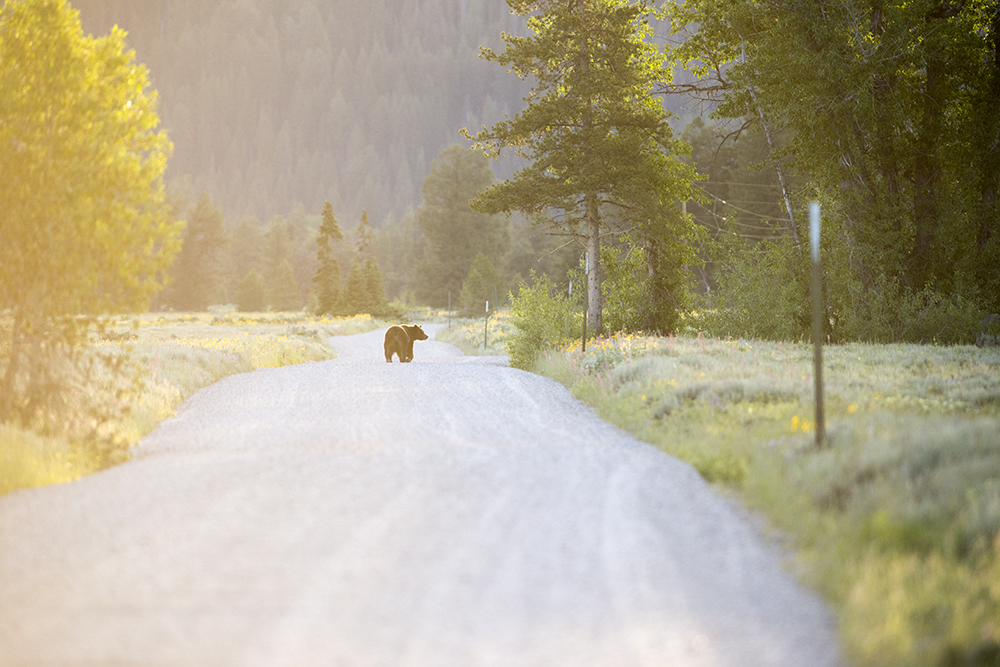 Last Monday morning I awoke in my tent, shivering just a bit from the chill in the air, before sunrise.  The light of the full moon lit up Signal Mountain campground and I quickly dressed and took off, anxious to see what the day would bring.  My hope was to spend time with 399 and Snowy.

But, the full moon was coming down on top of the Grand as I drove around Jackson Lake and so I stopped for awhile, for a few moon and early morning shots.

Just as I approached Pilgrim Creek, I spied what appeared to be a grizzly bear about 400 yards north of Pilgrim Creek Rd. and about 700 – 800 yards east of the main road.  But, when I pulled up to make my right turn, cones were stretched across the entrance.  No signs, no humans, no anything.  In Grand Teton National Park, rangers will often cone off a road and tell us that we are welcome to hike back if we choose.  Feeling certain that 399 and Snowy were back there, grazing their morning away, I grabbed tripod, camera and bear spray and headed down the road, absolutely tingling with excitement over the prospect of seeing Snowy again.

I set up just off of the road, near the first pump house and waited for about 10 minutes before a grizzly bear, all alone, came walking into view.  It looked like 399 but where was Snowy?  She stopped, looked at me and continued on, acting fairly normal.  Stopping to hunt for a moment before continuing.  The bear walked to the road and I watched her go, letting her get far ahead before slowly following behind.  She stopped and looked back a few times and I had the sensation that the bear was expecting company.   My mind went in 1000 directions, could this be a boar?  But, the bear was small for a male – maybe a young one.  Could the boar be looking for 399?  I wanted to believe anything except that this bear was 399 and something had happened to Snowy.

About that time, a wildlife brigade car came down the road and stopped to tell me that it was closed.  Not knowing what was going on, I was thoroughly agitated and they told me that the reason for the closure would make sense.  The brigade gave me a ride back to my car, where we met several others beginning their own hikes down the road, but they were all turned back.  By this point, all I could think was that they were trapping a bear for some reason – anything but that Snowy was dead.

But, after people looked at my photos and confirmed that the bear I had seen was 399, I knew the truth and the brigade finally admitted it to me.  Snowy had been hit and killed by a car.  The world crumbled at that point and I ran to my car to shed some tears in private.  For so many of us, Snowy seemed special and full of hope – he and his mom seemed to adore each other and there was nothing better than watching 399 and Snowy as they played with one another.  Snowy had character and he was beautiful.  How could he be gone from 399 and from us?

I was living in Spokane, WA when I read about 399 and her 3 cubs of the year, five years ago, hanging out close to the road in Grand Teton National Park.  At the time I didn’t even know what a GTNP was – had seen photos of the barns against spectacular mountains but didn’t even know where they were.  But, I knew that I had to see grizzly cubs.  Within days I had made plans to do my first real camping trip since my 7 back surgeries, going to Glacier, Yellowstone and GTNP.

When I arrived in the Tetons, I asked about 399 but people just said she was around somewhere.  Well, once I showered and left my lodging at Colter Bay, it was a matter of a few miles and moments before I was seeing a beautiful grizzly sow with the 3 cutest little babies I had ever seen.  And, they were wandering in wildflowers with some wonderful late afternoon light on them.  They walked right past us!  I was hooked.

Thus, 399 began my journey into wildlife photography in the national parks.  Meaning to spend just a few days in GTNP, I spent 3 weeks in my tent and didn’t want to go home.  And, once home, I felt like a caged cat that had to escape.  And, so I sold everything and began my travels.  But, year after year, for the past 5, I have been drawn back to GTNP to see 399.  Snowy was the third litter of new cubs I have seen from 399 – the first two were triplets and he was by himself.  And, each year there has been so much heartache with the cubs.  Only about 50% of the bear cubs survive and 399 has lost 4  out of the seven she had in the past 5 years.  One of her sons was raised by 610, her only daughter, and he might still be alive.  Another son was hit by a car, leaving his sister, Ash, all alone, most likely to perish, because 399 had kicked the cubs early in order to save them from a boar.  Two sons from the next litter have survived.  610 is the only daughter and she now has her second litter of cubs – two yearlings.  Both mother and daughter raise their cubs near the road but are rarely seen when alone and without cubs.

We learned of Snowy’s death and the entire community was devastated.  A memorial of a heart in stones was made and gave us all a place to go and feel close to Snowy.  There we talked to friends and made new ones.  The rangers let us keep the memorial for the day but took it down the next morning.  That night, Bernie and I were at the memorial, talking.  He had just finished filming me for an interview for ABC news when someone asked us if we saw the grizzly bear.  399 had walked right past us and she was headed to find Snowy.

Watching 399 look for her son was traumatic – she was agitated and frustrated by all of the people who wanted to see her.  Few knew that the bear that they were watching had just lost her cub.  She went to where she last saw Snowy but he was not there because rangers had removed his body.  Her son was gone.  399 crossed the road and has not been seen since.  Not far behind her was a boar, named Bruno, and I would like to think that the two are frolicking in some wildflowers and staying cool in a remote pond.  I would like to think that 399 will come out with new cubs next year.  But none will replace Snowy.  He was the largest, the healthiest and the most beautiful of them all.  And, he was the most special.  But, he had another purpose that we might not yet fully understand.

Officials are working to delist the grizzly bears but the outpouring of emotion, world wide, over Snowy’s death, shows us how many people love these bears.  They are so much more valuable to us alive, for the eco-system and for our education about nature, than they are dead for the pleasure of one man with a bullet.  Snowy will become the face that asks for safer roads for all of the wildlife, and he will ask that grizzly bears not be hunted.

We must turn this tragedy into something positive that will help save our wild animals and lands.

This is a video/slideshow of my time with 399 and Snowy, and the aftermath of Snowy’s death.  You will want to watch full screen, if you can.