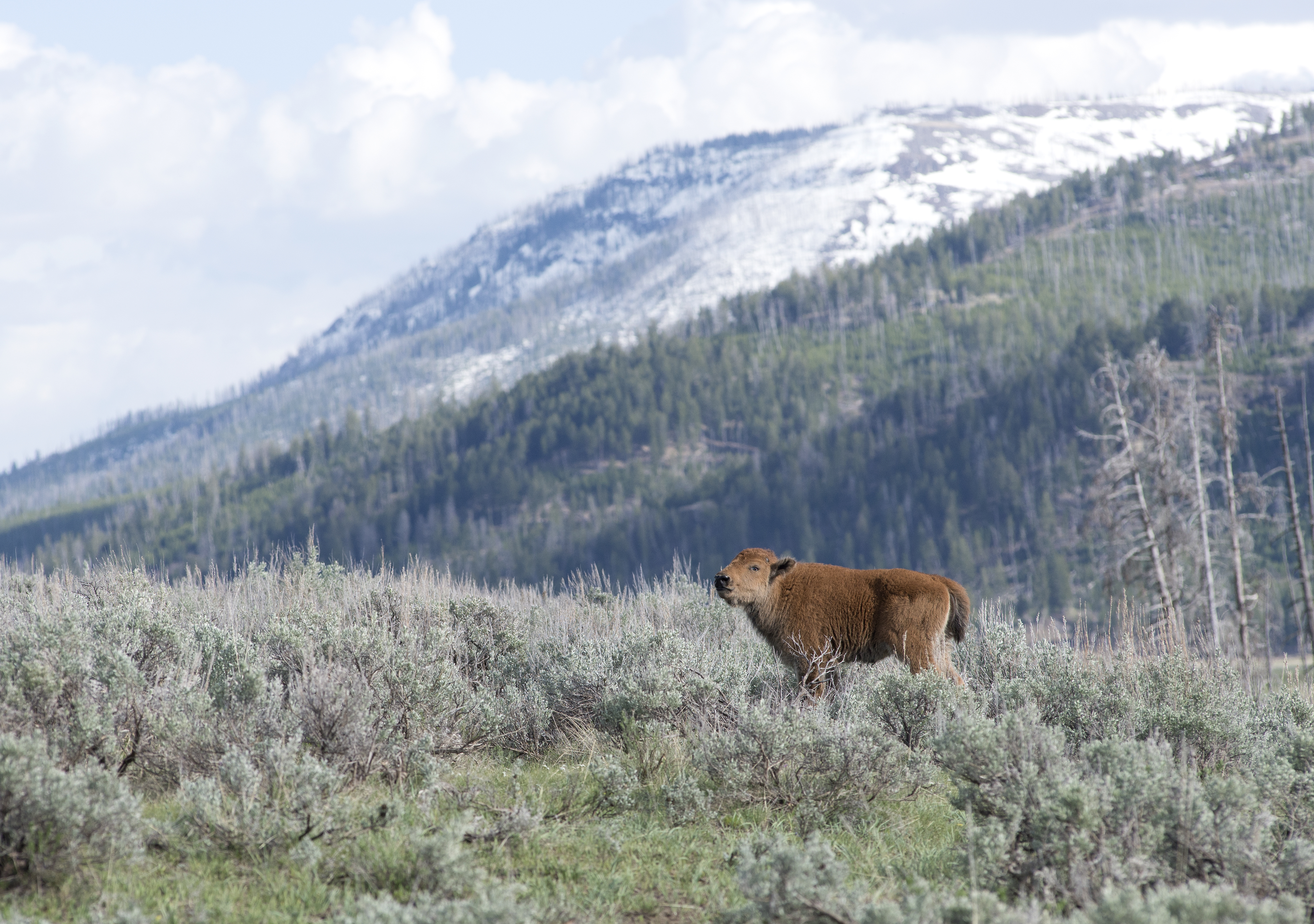 Spent most of the day in Lamar, watching the bison carcass in hopes of bears and wolves coming in.  I did end up missing the wolves and bears together at the Wapiti carcass, darn it.  Heard that right after I left two wolves and the bear came in to eat.  And, that one wolf and the bear were at the carcass early the next morning.

Arrived in Lamar super early, in time for a little nap before sunrise, which meant that I missed the grizzly on the carcass at the Blacktail.  Though he was still there last evening at around 8 p.m.

This is the same playful young grizzly that had the first Blacktail carcass all to himself in early spring and never left.  He was very entertaining.  Evidently, he dug this carcass up yesterday morning and was putting on a show. 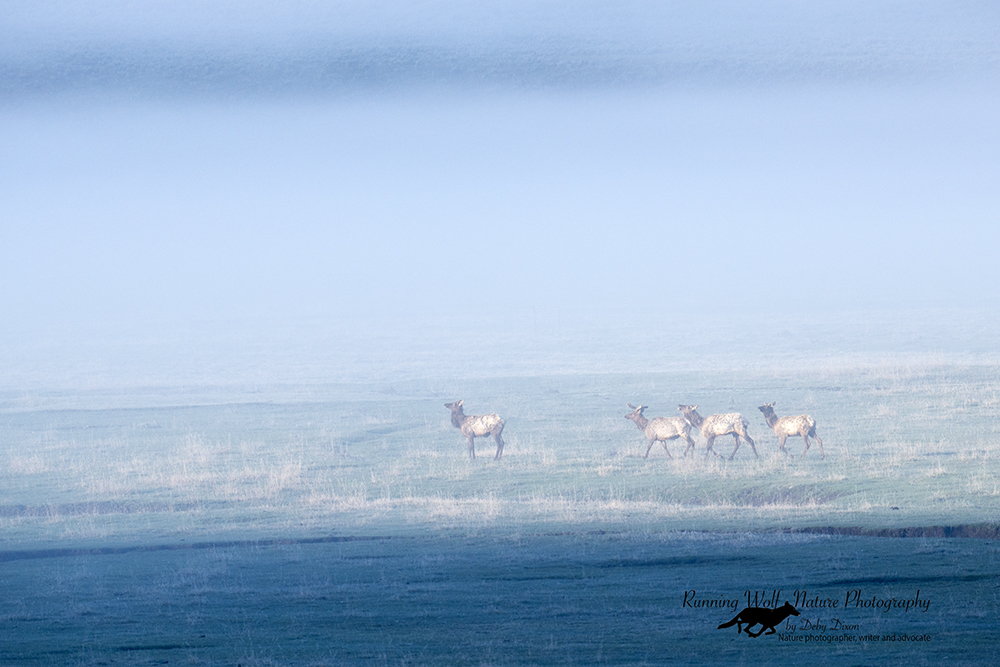 While waiting for action on the Lamar carcass – there was a wolf and bear to the east and a wolf to the north, so hope – these elk were seen running back and forth in the middle of the valley where the fog was heavy.  Nothing was seen chasing them but they acted nervous. 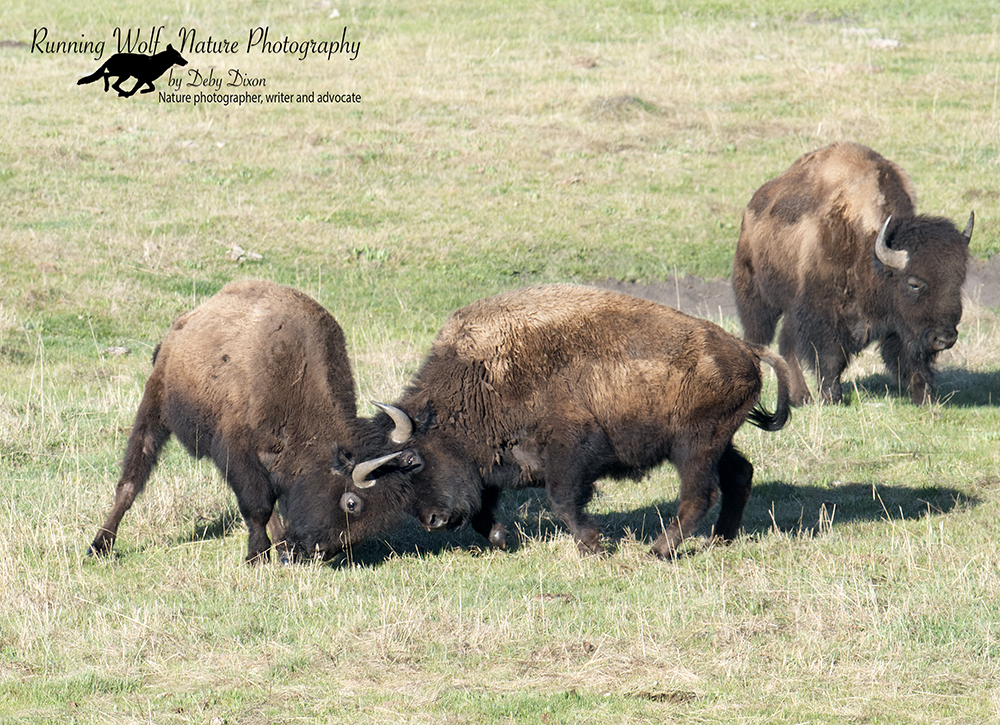 And then a very large group of bison bulls came in and had a bit of a rowdy funeral around the carcass.  Lots of snorting and fighting going on.

And then we began to see two wolves on the hill above us.  One, I did not recognize – it had long, shaggy fur and a white spot on its neck.  Some said it had a collar but it did not.  Large wold, just shaggy from the extra long fur and it had an interesting face.  I had heard that there was a second wolf with no tail and wondered it the tail had just been tucked. Well, it had been and it was Starlight from the Blacktail.  She has found a friend!  The wolves began to come down the hill and I knew that Starlight would possibly come to the carcass if she had space and so convinced people to give her room, which most did.  A few chased after her but she foiled them and came right on down, while the other wolf turned back.  She was not on the carcass long before going off to wander the valley.  Not sure why she wouldn’t take advantage of the meal but she looked good.

The carcass is anywhere from 190 to 150 yards away, depending on where you stand and so a little close for most predators.  She spooked at people standing on the hill but came right back.  So good to see this wolf again.  She had been hanging out at Floating Island for a couple of weeks where some people got great photos of her.  Seems she is doing a lot of wandering.

Last but certainly not least, was this orphaned bison calf.  So sad to see this, particularly when they are so healthy.  One of my cameras had exactly 4 shots left before going out completely and I took them of this beautiful red dog.

One thought on “Starlight in Lamar!”