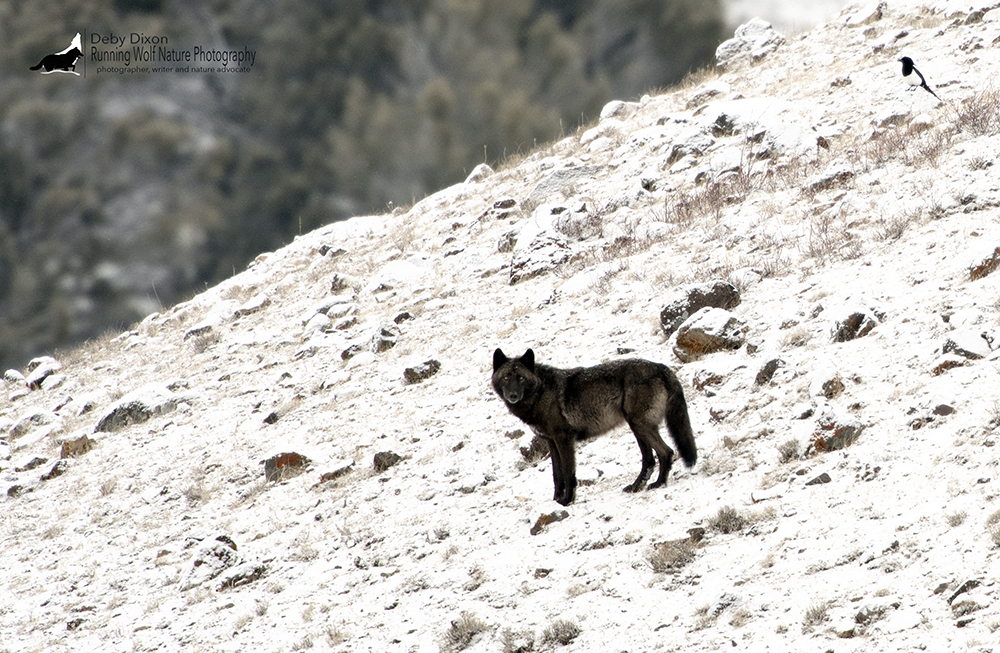 Once again I arrived in Lamar Valley just after 5 a.m.  But, this morning, all was dark.  The moon was behind the clouds and all I could make out on the carcass was shapes.  The fox ran off and in came the wolves.  But, again, just shapes.  And so I took a nap.

Imagine my surprise when I awoke and the world had turned white!  The snow had come in and visibility was poor.

A couple of bison were on the hill in front of me and I kept thinking, what a great shot.  But, it was too dark and so I just watched as the snow gathered on their thick coats.  And then I decided to do a time lapse of the snow falling on one of the bulls.  This would have worked much better had it not quit snowing but it was fun all the same.  It looked as though the bison was talking.  I  put together several time lapses and a short video piece of carcass action – it will be on Running Wolf later tonight or tomorrow.  I will also post it here if possible.

There was an eagle on the carcass but all of the coyotes and the foxes were staying away, which told me that the wolves were still close by.  You never know about wolves, they might feed and then move off quite a ways before the sun comes up.

Still, my heart jumped when 926 and Little T came up the hill.  T dove right in but 926 looked around.  She glanced at me a couple of times but didn’t linger.  Like she was saying, “Oh, it is you.”  She didn’t know the others.  I wanted to get out of the car but T kept her eyes on me and I didn’t want to spook her, so was further back than planned.  That was okay.  After 3 early mornings I finally had what I wanted – wolves on that carcass.  And, I was glad to see it was the Lamar Canyons.

Then 949 came up the hill but not to the carcass.  He went to the top of the knoll and looked around.  As if he had just rejected the situation, 949 turned and left.  Both girls seemed to get a little nervous when 949 first arrived and it appeared as though they were waiting for his cue.  He gave that when he walked away and 926 hustled right after him.  T was a little hesitant about going but soon followed.  I’m wondering if 949 is a very dominant male – 926 usually calls her own shots but hasn’t been with him.  She did what she wanted with Husky but really liked to be around him.

Gone, just like that.  The whole thing, what I waited three days for, lasted less than 5 minutes.  I sat there awhile, not knowing that the wolves had traveled east and crossed the road.  When I went down that way to see what was going on, all but Dot had crossed and then I saw him dart right in front of two cars – one of those was parked in the wrong lane so they could see the wolf.  There wasn’t much of a crowd but those that were there, the visitors, were pretty thrilled to see a wolf pack fairly close.  I think that the watchers were disturbed by our presence but that gives them something to talk about.

I watched as the wolves went up Mottled’s Hill and disappeared.  They probably went to bed for awhile and will no doubt return to the carcass.  But, it was time for me to go home and get some work done!  I am starting a photography tour business in Yellowstone and couldn’t be more excited.  If you would like to join me, email me at debydixon@mac.com.  Business will be starting up next month.

Just thought that I would throw in a moose pic for the heck of it.  This was taken in Round Prairie this winter. 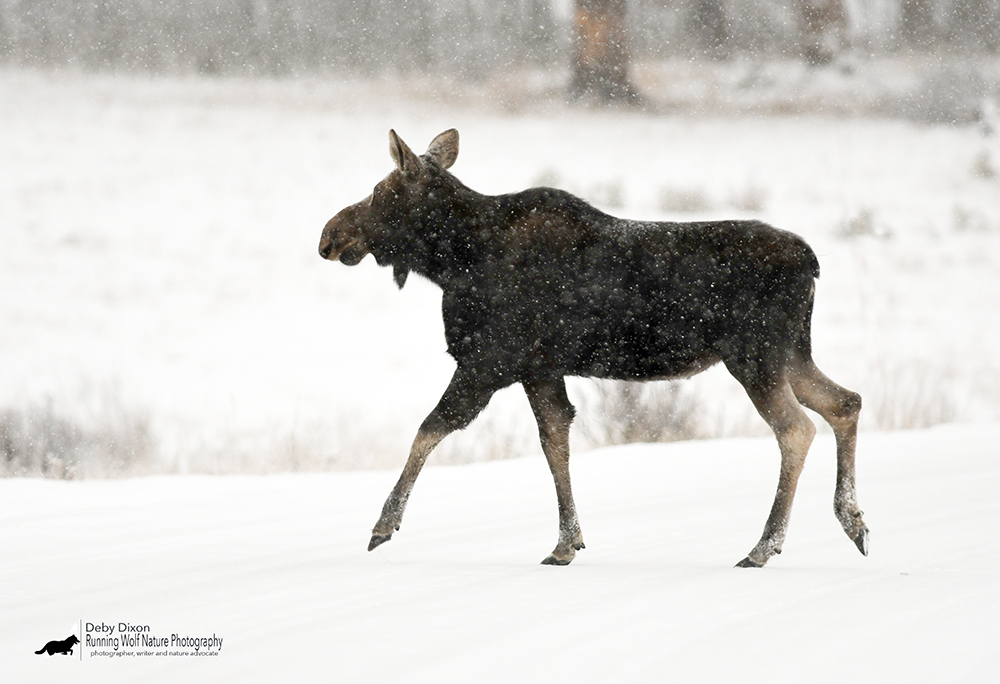